Story Outline: Avinash Jadhav aka AJ (Bhushan Pradhan) fulfills his dream of becoming a superstar actor. But like many other things, even stardom isn’t permanent in the film industry. Will AJ regain his lost glory?

Review : A common man’s journey in the film industry from nobody to somebody prominent is not a novel concept. But this is not the problem with Sakar Raut’s Kalakaar as you (even non-Kalakaar’s) would feel for the protagonist due to Bhushan Pradhan’s innocence. The problematic areas are the levels of amateurism seen in various departments, events in the second half and a completely unacceptable climax.

The film does show decency initially when AJ starts his journey to achieve his dream. Any struggling actor or a struggler in any field would be able to relate to the character. The unconventional narration with the use of flashback and flash-forwards works well for it raises your curiosity. But what appears questionable is that there is just no portrayal of AJ’s rise and fall from stardom. Still, the first half manages to fall in the watchable category. 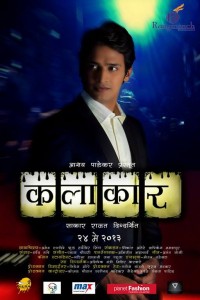 There are just too many problems to list in the second half. The screenplay just loses focus with the events neither being logical nor interesting. There are also scenes that just keep on dragging without any purpose. This is seen the most during the sequences where the audience is giving opinion on AJ’s new film, reporters speaking on AJ’s case outside the court, shooting scenes, etc.

Still you expect some degree of satisfaction from the finale from the mystery about the accident. Instead, what you get is something unfathomable. Examples – a person is accused and tried for murder without anybody finding the dead body, he is not arrested at all after being charged for something as serious as murder and lastly, the shockingly silly culmination that completely goes against the protagonist. In fact, the final twist also makes you wonder at the decision of the producers to finance such a story!

Talking about the music, the film only has the title song which is peppy and enjoyable. The technical departments (cinematography, background score and editing) are above average.

Although there is scope for improvement, Bhushan Pradhan’s performance makes the film watchable. But the actor did look quite uncomfortable while dancing. Amruta Deshmukh isn’t bad. The rest of the supporting actors give average performances.

Overall, Kalakaar suffers due to the story and its treatment. The film has no chance at the box-office.