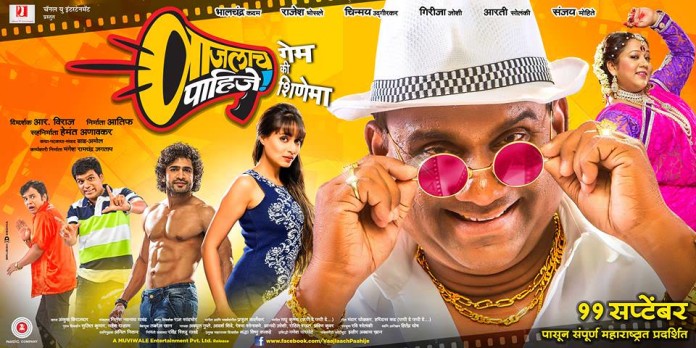 A number of people associated with comedy films have agreed that making the audience laugh is the most difficult challenge. Hence, comedy is said to be a serious business. Films like Vajlach Pahije: Game Ki Shinema continue proving this theory right. In an attempt to pay tribute to the late Dada Kondke, the film turns out to be a wannabe laugh-riot. 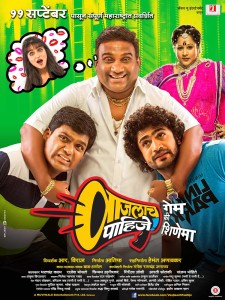 Vajlach Pahije tells the story of two best friends Yash (Rajesh Bhosle) and Raj (Chinmay Udgirkar), who are struggling filmmakers. After having worked in the production team of few Marathi films, they are desperately searching for that one producer who would give them their big break as directors. They come in contact with the crazy film producer, Bhau Damdar (Bhalchandra Kadam).

Bhau is a pervert, always on the lookout to ‘enjoy’ struggling actresses through casting couch. He agrees to give break to Yash and Raj with the condition that they should provide a good-looking actress for his carnal desires. The two friends agree and they find the beautiful struggling actress, Supriya (Girija Joshi).

Among the various problems with the film, the biggest one lies with the basic plot itself. Yash and Raj are decent and honest individuals. So, why do they agree to Bhau’s filthy demand? More importantly, why should the audience have any sympathy for them? Similarly, it becomes difficult to enjoy the dark humorous side of Bhau for the kind of pervert he is. There are sympathy issues with the character of Supriya too.

However, even if you ignore these issues for the sake of comedy, there isn’t much in store for you. The paper thin story is told through a screenplay that lacks flow with some forceful and over-the-top comedy. To be fair, the film contains some genuinely funny moments but they are not enough to override the aforementioned many negative points. Plus, the abrupt climax makes you wonder as to how the film ended. The music is also nothing much to talk about. The technical aspects like cinematography and editing can also be described in the same way. The background score is inconsistent. For example, when a scene transforms from comic to serious, the comic tune continues playing in the background.

Bhalchandra Kadam’s comic talent provides some respite. He has carried the responsibility well. Rajesh Bhosle provides a mature act. Chinmay Udgirkar has talent but he is unnecessarily made to mimic Shah Rukh Khan throughout the film. Plus, he doesn’t do it that well. In the role of the female lead, Girija Joshi is decent.