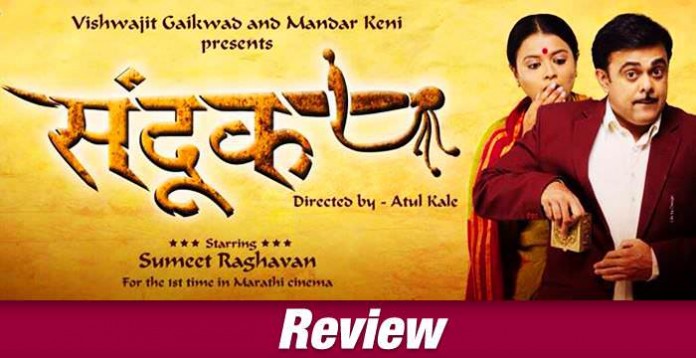 India’s freedom struggle against the British wasn’t limited to prominent places like Delhi, Calcutta, Bombay, Lahore, etc. There were countless small or tiny villages that also contributed towards the revolution. Last year, Ganesh Kadam’s Vitti Dandu was based on this issue. Now, Atul Kale’s Sandook tries portraying this phenomenon, although in a different way. 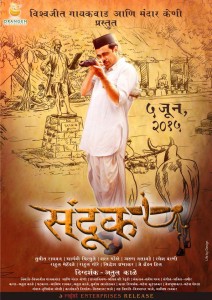 The mixture of humor and seriousness works for the film but only to some extent. A not-so-impressive screenplay, the luke warm mystery surrounding the sandook and few other issues make this period drama rise only up to an average level.

Sandook is based in the pre-independence era in Sambhalgad, Maharashtra. Wamanrao (Sumeet Raghavan) works in the post office and lives with his wife (Bhargavi Chirmule) and son. He is proud of his forefathers, who had made important contribution in the history of Maharashtra. However, Wamanrao lacks courage to face any challenge. He is a laughing stock among the villagers, including his astrologer neighbor Shyamrao (Sharad Ponkshe)

Sandook is visually pleasing. The beautiful locations of the village are artistically captured by cinematographer Ajit V. Reddy. There are a number of sequences that ooze his impressiveness. The frames become more enchanting due to the production design that recreates the bygone era. Some humorous situations featuring Raghavan is another point that makes the film watchable. 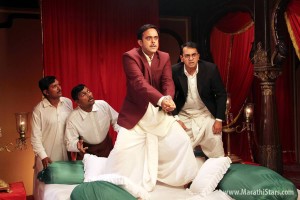 But the film falls short of being impressive. The first half takes too long to arrive at the point. In other words, you keep wondering about the basic idea till the interval. Even after the plot is established, it moves at a sluggish pace, which is made worse by a couple of unnecessary songs. Add to this, the difficult to believe climax (not adding anything further to avoid spoilers).

Sumeet Raghavan makes a confident debut in Marathi cinema with this film. He gets his comic timing right. However, what was the need to make him act childish so frequently? This makes it look as if he is trying too hard to be dumb. Sharad Ponkshe succeeds in a challenging role. Brandon Hill, as Scott, suffers due to the clichéd characterization of a British officer.

The Lord Krishna song in Sanskrit generates a terrific effect. It saves the climax to some extent. But the rest of the songs are pretty average.

Sandook is an average saga about India’s freedom struggle. It won’t earn well at the box office.