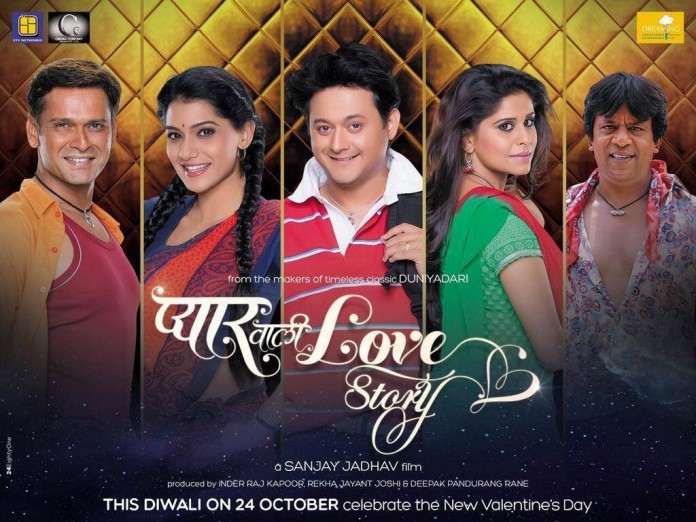 Romeo and Juliet stories are done to death. But this is not exactly the reason why Sanjay Jadhav’s Pyaar Vali Love Story doesn’t work. The film gets the viewer interested for some time but suddenly falls down the graph of sensibility and continues to do so till its hilariously silly climax. This is enough to ensure that the important message that it tries to give is lost.

The story is set in 1992 in Mumbai. Pashya (Sameer Dharmadhikari) and Kadar (Upendra Limaye) are the best of friends living in adjacent colonies occupied by Hindus and Muslims respectively. Pashya is in love with the hot-tempered but kind Nandini (Urmila Kanitkar Kothare), from his locality.

Amar (Swapnil Joshi), Pashya’s brother who stays in a hostel in Pune, returns to Mumbai to arrange his brother’s marriage with Nandini. As soon as he arrives in the city, he falls for Aliya (Sai Tamhankar), who is Kadar’s sister. But they soon realize that their path of love is filled with obstacles.

Pyaar Vali Love Story works decently in the first 50-55 minutes. Simple characters, their strong bonds and small joys gain your sympathy. Although the spoon-feeding narration and the forceful bonding between both communities could have been avoided, you at least feel interested due to some appealing moments. For example, the manner in which Kadar gets people of the locality to take part in Pashya’s wedding. Despite the tried-and-tested method, the romance angle also somewhat works.

But like an accident, the film abruptly loses sense just before interval through an unconvincing twist. What follows is one silly scene following another initiated by a poor misunderstanding. It amazes you how some characters, who till now showed a lot of maturity, suddenly start behaving like immature kids. But just when you think you have seen enough absurdity, you realize that the writers have saved the best one for the climax. On a less serious note, it at least succeeds in making you laugh.

Another questionable aspect is such high usage of Hindi in the dialogues and songs. The obvious reason for this is that few characters are Muslim. But that doesn’t mean you convert the film into bilingual whenever they are speak.

The performances are hampered by the content. Swapnil Joshi and Sai Tamhankar manage to impress as the lead pair. Upendra Limaye and Sameer Dharmadhikari are decent as hot-headed individuals. Urmila Kanetkar-Kothare provides a believable and dedicated act by smartly getting into the skin of her character. Nagesh Bhosale and Chinmay Mandlekar, in a cameo, are alright.

Pyaar Vali Love Story fails in giving an important message due to some unforgivable absurdities. The presence of well-known names and the fact that it is the next film by the team of Duniyadari will ensure a good run for it at the box office in the first week.