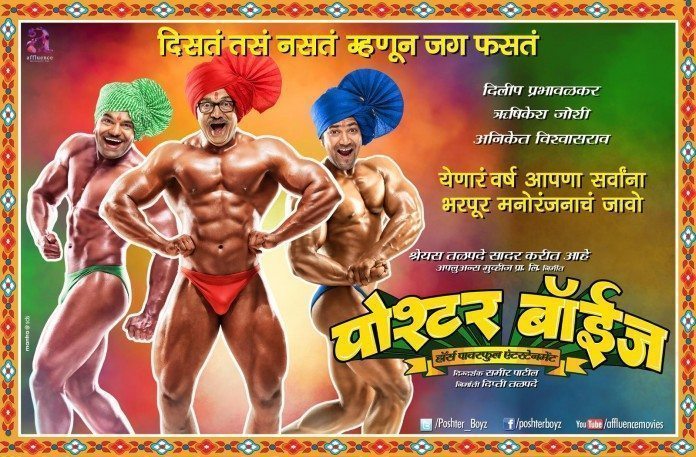 In Vadaner village, the lives of the aged, highly respected Jagan Deshmukh (Dilip Prabhavalkar), school teacher Sadanand Kulkarni (Hrishikesh Joshi) and youngster Arjun (Aniket Vishwasrao) come crashing down after their photos are printed on a poster encouraging Vasectomy (Nasbandi) without their knowledge. Now the trio must find the culprit responsible for printing their photos before it is too late.

Most of the times, when comedy is born out of a serious issue, the humor takes a backseat at some point in the film, mostly the latter part of the second half. But debutant Sameer Patil’s Poshter Boyz doesn’t fall in that category. The film achieves a rare feat of being a laugh-riot for the entire duration despite the fact that it also raises few important social issues.

Confusion comedies are not novel by any means but Poshter Boyz manages to stand apart due to the subject of Vasectomy, which is unheard of, and the smart manner in which it arrives at the main point. From here on, the fun just doesn’t end.

Generally, we associate a laugh-riot falls with mindless or slapstick comedy. But this is a rare example of a non-stop laugh-riot only using sensible situational humor. And when your laughter doesn’t fade even long after the joke, you know it is a huge achievement for the writing, more so when the humor is maintained even during serious situations.

This is not the only reason why Poshter Boyz works. Just like Satish Rajwade’s Popat, this film also manages to present a sex-related social issue in a manner that not a single family member of any age group would feel awkward (The film is nowhere similar to Popat though). The only drawback here is that it treads on the tried and tested route in the closing moments. However, this isn’t a big issue. 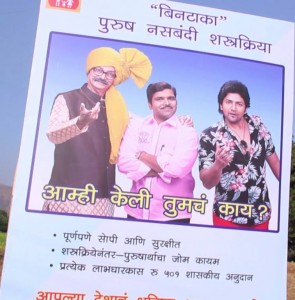 Composer Leslie Lewis makes a successful Marathi film debut with this film. The song ‘Deva Deva’ is a sheer pleasure as it skillfully mixes three different genres – spiritual, romance and lawani – in one song. The title track and ‘Kshan’ also score high marks. Pushpank Gawde makes a mark with his artistic camerawork even during simple situations. The background score is effective, although unnecessarily loud at times.

A film of this genre requires skillful comic timing and that is exactly what the actors present. The ever-reliable veteran Dilip Prabhavalkar once again gives a thoroughly mature and sensible act. He underplays himself during the comic moments, which works well. Hrishikesh Joshi continues from where he left in Yellow with another terrific performance. He portrays humor born out of frustration brilliantly. Aniket Vishwasrao is perfect as the hot-headed youngster.

Neha Joshi, as Kulkarni’s wife, is first-rate as an angry, frustrated wife. Pooja Sawant does what was asked from her and looks mesmerizing. The rest of the actors provide decent support.

Poshter Boyz is a rib-tickling laugh-riot with a timely message. The positive word-of-mouth coupled with a good promotional strategy will make it a winner at the box office.