The basic motto of a biopic is to do complete justice to the person on whom it is based. The next challenge for such genre of films is to leave behind a solid impact on the heart and mind of the viewer through his message or teachings. Om Raut’s Lokmanya – Ek Yug Purush succeeds in both areas while also making sure it is not just any other freedom fighter biopic.

Lokmanya – Ek Yug Purush focuses on the life of India’s freedom fighter, journalist, teacher and social reformer, Bal Gangadhar Tilak aka Lokmanya Tilak from the time he was a college student till the end of his life. The film highlights his fight against the British rule through various means and its consequences.

The story of a newspaper journalist (Chinmay Mandlekar), based in today’s times, is also narrated simultaneously. Hailing from Mumbai’s middle-class, he is about to marry his rich fiancée (Priya Bapat). But a chance incident ignites some serious inner conflict within him.

Biopics face a danger of becoming a bit boring or a drag, making it unacceptable for the youth. But Lokmanya steers clear from it. Through a riveting screenplay, powerful dialogues and appealing presentation, you are kept engrossed. It also makes sure that the protagonist’s inspiring lines don’t turn out to be fake or corny. Although the film is filled with soul-stirring events, the sequence about the explanation of the Bhagvad Gita and the sad truth during opening credits deserve mention.

But as mentioned before, the film stands apart from the usual biopics. This is due to the story of the journalist, based in today’s era, which is connected to the life story of Tilak. This aspect will break your heart about the kind of lives people are living today. It will force you to question not only others but also yourself.

Lokmanya has few issues though. The commercial element in some sequences should have been toned down. But the biggest question mark is the change of heart of a supporting character, which is unconvincing.

Ajit-Sameer’s music enhances the proceedings to a greater level, especially the theme song. The same can be said for the technicalities (camerawork, background score and editing), production values and costume designing. 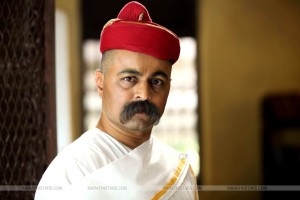 Lokmanya wouldn’t have been reached this level without Subodh Bhave’s brilliant enactment of the protagonist. With a powerful and heartwarming act, he shows why he is one of the finest artists around. Sameer Sanjay Vidwans too shines in the role of Gopal Ganesh Agarkar.

Chinmay Mandlekar succeeds in displaying frustration and helplessness, mostly through his expressions. Priya Bapat too plays her part perfectly. Angad Mhaskar, as Daiji Khare, Prashant Uthale, as Chapekar, and the rest of the actors play their parts well. However, the actor in the role of Swami Vivekananda is a miscast.

Lokmanya – Ek Yug Purush is an ideal film for today’s youth to know this important personality from India’s freedom struggle. It is expected to do well at the box office.