After his magnificent debut with the classic Harishchandrachi Factory, India’s official entry to the Oscars, there was naturally a keen wait for Paresh Mokashi’s next. The wait is finally over as the maker is back with Elizabeth Ekadashi. Looking at the overall product, we can say that the close to five-year wait is worth. The film turns out to be another simple heart-warming tale that leaves a wide smile on your face.

The story takes place in the holy village of Pandharpur (Maharashtra) where the adolescent Dnyanesh (Shrirang Mahajan) lives with his mother (Nandita Dhuri), younger sister Mukta (Sayali Bhandarkavathekar) and grandmother, after his father passed away few years back. His father had built a unique bicycle named Elizabeth. Dnyanesh and Mukta are literally in love with it.

With his father no more, his family is facing severe financial crisis. His mother needs to pay five thousand rupees to the bank to get her sweater machine back. For this purpose, she considers selling Elizabeth as that would greatly help the cause. But naturally, the kids oppose to the idea. Will Elizabeth be saved? Over the last few years, Marathi cinema has been regularly churning out simple and realistic rural flicks with strong emotional storyline and characters you easily fall in love with. Elizabeth Ekadashi. also falls in this category. However, it manages to stand apart from most of such flicks due to the utter realism it oozes in literally every frame. The real, everyday scenes of Pandharpur are simply a delight. Therefore, it is difficult to accept that the characters are fictitious.

The film follows a contemporary mode of storytelling wherein the tale is narrated through real, everyday scenarios, which makes it smooth flowing and natural. What is further impressive is that Mokashi clearly steers away from melodrama, for which there was a lot of scope. Hence, there are countless moments where a scene says a lot without saying much.

Coming to the negative points, there is one questionable aspect, which cannot be revealed to avoid spoilers. The entire plot also becomes predictable after a while. But thankfully, you tend to enjoy the predictability as it fills you with delight as you leave the hall. 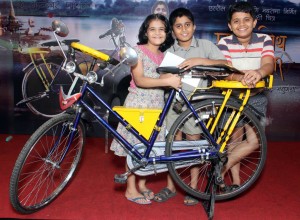 The only song ‘Dagad Dagad’ by the late Anand Modak is used as the theme and it suits the subject perfectly. There is some fine display of art by the cinematographer (Amol Gole) while the background score too is impressive.

The film is also blessed with excellent performances. In the role of Dnyanesh, Shrirang Mahajan simply wins you over with an outstanding act. Considering his age, he has carried the responsibility with amazing ease. Nandita Dhuri too puts forth a brilliantly believable portrayal of the mother.

Sayali Bhandarkavathekar as Dnyanesh’s sister is amazingly cute. The lady playing the grandmother doesn’t lag behind at all. As Dnyanesh’s friend, Pushkar Lonkar is hilarious! At the same time, he scores well during emotional scenes too. The rest of the actors offer perfect support.

Elizabeth Ekadashi is yet another heartwarming rural tale from Marathi cinema. The film stands a good chance of garnering impressive collections at the box office.