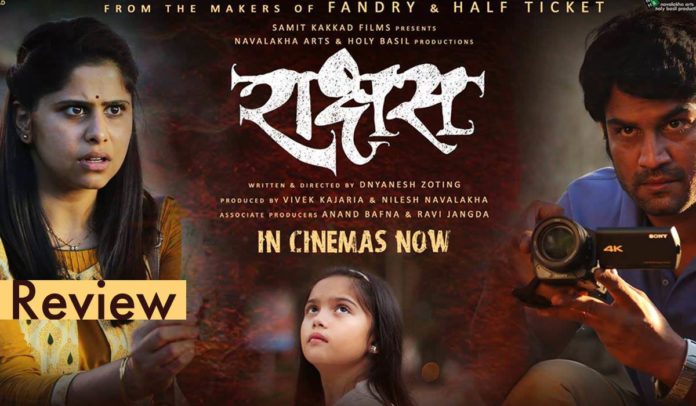 The poster of this film was supposedly inspired by the poster of a modern classic directed by this year’s Oscar favorite director Guillermo Del Toro. It goes by the name ‘Pan’s Labyrinth’. Raakshas’ inspiration from the mentioned film is not restricted simply to the poster but it’s present in the film itself. It’s not a crime though filmmakers around the world do that & they add many of their own things to those films. Raakshas’ addition could be highlighted as the backdrop of the tribal culture in Maharashtra. Alike Pan’s Labyrinth this film uses the ‘Fantasy’ element & mixes it with the actual narrative of the film, moreover there are a few more similarities too. But the problem is that in ‘Raakshas’ the fantasy element doesn’t manage to create any excitement of its own. It feels like a mere narrative device used to take the other narrative set in reality forward. And it becomes repetitive throughout the length of the film.

There’s a quality about films that have ‘fantasy’ as an important part in the story. The creation of the fantasy world! It need not be done as a clear cut introduction. It can happen over time as the screenplay moves forward. In case of ‘Raakshas’ this world is never really created. You don’t really care about this world or the little girl who discovers it. The other & actual narrative of the film is not really a narrative but just a backdrop, a backdrop that had much scope of belonging to a different film, which could have treated it as closer to the real world & explore every face of it. I don’t have a problem with fantasy but it’s inclusion needs to be justified!

‘Raakshas’ is a film that over complicates the narrative & it’s connection with fantasy only to over simplify it later. Sharad Kelkar’s character is a documentary maker who was once a ‘Blasting Engineer’! A ‘Blasting Engineer’ to make the narrative convenient! The film had much scope if it had discovered a fantasy device of it’s own rather than blindly following the pattern of the mentioned film.

Having said all that ‘Raakshas’ is still a pleasing experience for your senses, the film is wonderfully shot, edited & the background score is probably the best I have heard in a Marathi film! The score inhibits the spirit of the ‘tribal’ backdrop completely. The performances are good too. Sai Tamhankar has little things to do herself as she is more driven by other characters in the film including her daughter. In a way this helplessness of making any decision on her own is an integral part of her inner conflict. And Sai Tamhankar nails it perfectly in her performance. The little girl ‘Rutuja Deshpande’ too has good camera sense & the director succeeds in bringing out her non-child like behavior. The minimalist approach in her performance again needed a better world (of fantasy).

The biggest disappointment of the film arrives when it ends. The whole narrative of the tribal people fighting against the builder mafia for their forest ends on an incomplete & problematic note. By the end the metaphor of ‘Raakshas’ gets completely messed up & so does it’s fantasy equivalent which also feels irrelevant.

A better screenplay & a more original ‘fantasy’ world would have made wonders to this film. But still as a director Dnyanesh Zoting makes his presence felt. With a better script in hand Zoting can be a director to watch out for!