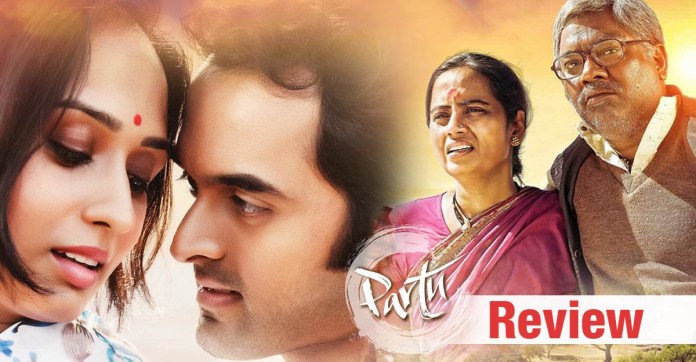 Some films have so much heart in them that it is difficult not to get charmed. Every good moment is cheered in your mind, and a false note leaves you upset. Partu is certainly that kind of a film. But, quite disappointingly, the film hits a false note a little too often.

Partu, based on a rather fascinating true story, is about how in the 1960s a seven year old Rajasthani boy Prithvi Singh gets lost while visiting his Uncle in Mumbai, then gets on to a wrong train and reaches Ahmednagar. There, Lakshman, a benign farmer, takes him home and treats him like his own child. Partu or Prithvi on receiving the care and affection fast becomes a member of the family and the longing for his home steadily dries up. However, despite the language barrier Lakshman does not give up on finding Partu’s parents and resolutely continues the search even as decades passes by.

If there is one aspect that holds the film together, it has to be the solid performances by most of the cast. Smita Tambe and Kishore Kadam as the husband-wife pair that big-heartedly accept a lost child into their family and raise it like their own are easily the best part about the film. It wouldn’t be too much to say that if it wasn’t for their arresting performances, the film could have well fallen flat on its face. Both Tambe and Kadam have done similar kind of roles before, but never together. Here, they feed off each other to great effect. The Rajasthan based portions in the film have actors that speak the native language and special kudos must be reserved to the makers of the film to have casted local Rajasthani actors who all shine in their cameos.

The camerawork is steady and some shots in the deserts of Rajasthan are picturesque. The efforts to maintain the period details are visible when you see a young Partu riding on a model of a motorcycle that does seem from that period. These signs of genuineness are exactly why you are left rather upset with the film. Take for example, just about when you have started caring about the film and its characters the director typically throws a rather tawdry and needless ‘lavani’ at you. The Rajasthani cum marathi song towards the end of the film also feels uncalled-for. This, despite other songs giving you a glimpse of the reasonable talent the director poses to picturise songs. You are definitely left wondering why the need for these cheap gimmicks.

Then comes the inconsistencies in the screenplay. Seven year old Partu gels a little too easily with Lakshman and his family. It seems implausible that a seven year old kid would so soon choose to stay with a stranger family and not wish go back home. But then, it is after all based on a true story so we may choose to overlook this. But, the portrayal of Partu’s wife cannot escape our scrutiny. Partu after growing up, gets married to a girl who is seemingly born and brought up in Mumbai. However, much to our surprise, this girl (played by Gayatri Deshmukh who bears a striking resemblance to Ketaki Mategoankar) looks and acts like a village belle.

The film does start to further lose the plot as it nears its finale. The melodrama is expected and also to a certain extent apt. But in the first place we are not convinced why a family from Ahmednagar would go on a pilgrimage to Rajasthan. There is a rather amateurish attempt at surrealism at one point in the journey. A scene written to put across how bringing up Partu has made Laxman courageous, ends up being too filmy.

All these blemishes hurt as otherwise Partu is a fairly engaging film. There is undeniably an endearing quality to the whole plot and the acting keeps you hooked for the most part. The makers do seem to have made an honest effort at telling the tale. Unfortunately, the film hits the false notes a little too often to make it a smooth ride.