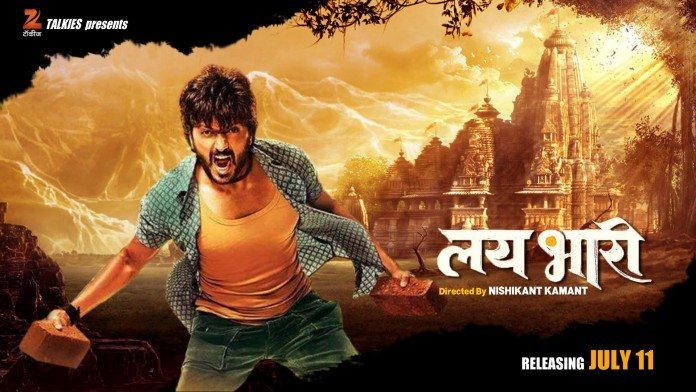 Mauli (Riteish Deshmukh) is a carefree youngster living in the holy village of Pandharpur. As his parents are unknown, he considers Vitthal-Rakumai as his parents. He is in love with his childhood sweetheart (Radhika Apte). His free-flowing life comes to a halt when he gets to know a shocking truth about his past. This revelation also brings him at loggerheads with the evil Sangram (Sharad Kelkar).

From the trailers, Nishikant Kamat’s Lai Bhaari looked like a typical hero-oriented masala film. While it surely is one, the film in totality is much, much more than what is revealed by the promotional material. This doesn’t ensure a quality product though due to an age-old storyline, done-to-death narration and few other issues. However, there are enough paisa-vasool moments due to Riteish Deshmukh’s heroics that make the film a one-time watch for the lovers of this genre. 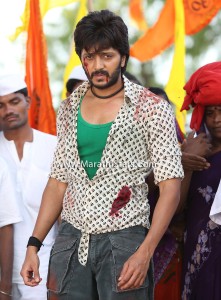 The surprise element is surely refreshing but it gives you a feeling that the film is a complete remake of a Hindi blockbuster released in 2000 (mentioning the name will be an obvious spoiler). It also makes it appear as if we are watching two different movies in two halves. The first half is quite non-happening since nothing substantial happens until its end. A lot of screen time is given to elements that make the film appear like a high on culture family drama.

The turnaround at interval point takes the film to a different level although one is able to guess the plot twist long back. Nevertheless, the genre comes alive in the second half with many cheering and whistling moments born out of Riteish’s antics.

But barring this, there is nothing much to keep the entertainment quotient high due to some tried and tested situations that we have been witnessing in Hindi films since 1970s. One might argue that such things haven’t been seen in Marathi films before. Although this is true, one can’t deny that the Marathi audience has been watching such genre of Hindi films since decades, more so since last few years. And to tell such a tale in over 2 hours 30 minutes is also not a good idea. Plus, mentioning Vitthal-Rakumai after every few minutes post interval becomes an overdose after a while.

The theme track ‘Mauli Mauli’ becomes one of the plus points of the film due to the overwhelming effect it provides. Apart from this song, ‘Aala Holicha San’ is noteworthy. The camerawork is impressive, especially during the aerial shots. The background score is as per the need. 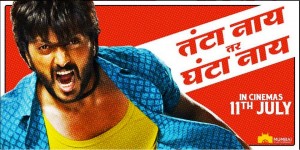 Talking about the performances, it is Riteish Deshmukh all the way, especially in the second half. The actor packs a punch through a powerful act that is sure to delight his fans. After a terrific act in the recently released Hindi movie Ek Villain, he is going through the form of his life. But despite his towering performance, Sharad Kelkar makes his presence felt through a convincing portrayal of the bad guy.

Tanvi Azmi plays Riteish’s mother with conviction. Radhika Apte, as the protagonist’s love interest, is decent. The actor in the role of a kid girl displays plenty of cuteness. Aaditi Pohankar and the rest of the actors play the parts as per the requirement. Salman Khan is super-impressive in a cameo. Genelia D’Souza too provides the surprise element in another cameo.

Riteish Deshmukh’s powerful act makes Lai Bhaari a one-time watch. With the terrific hype and the main lead’s heroics, the film will surely turn out to be a blockbuster at the box office.