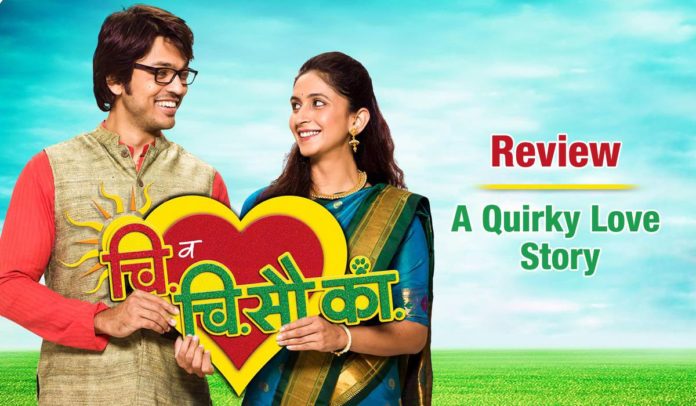 Savitri a.k.a Savi (Mrunmayee Godbole), a veterinary doctor and a staunch vegetarian (or ‘vegan’ as she calls herself in the film) and Satyaprakash a.ka. Satya(Lalit Prabhakar), an electrical engineer and an obsessed water conservationist are forced to marry each other by their parents. However, Savitri and Satyaprakash (a nod to the mythical pair of Satyawan and Savitri) are apprehensive about the same and unanimously take a decision, which leads to chaos among their families.

Romcom as a genre has been lately been explored too often by Marathi cinema. Be it adolescent love stories or tales that deal with Gen Y couples, many recent films have dealt with the same. Paresh Mokashi and co-writer Madhugandha Kulkarni give this love story a fresh spin by incorporating a unique twist in the tale. The twist comes in form of the condition put forth by Savi before she gives her to marrying Satya and is best left to be discovered by audiences.

The quirks of the lead characters and the apprehensions of their parents towards their terms help to add some interesting twists to the story. Mokashi and Kulkarni also use these quirks to take the story forward. Satya is omnipresent on social media but an introvert in real life. Savi is an individual striving for a cause and unable to bear any harm towards animals. Satyaprakash thrives on non vegetarian food, while Savitri despises those who consume it.

The makers waste no time in setting up the story and introducing us to the family members and friends of the lead actors who are equally loony. Among these, the characters that deserve a mention are Satyaprakash’s grandmom (Jyoti Subhash) who is going around with her next door neighbour (Satish Alekar), Savitri’s heavily pregnant sister (Sharmishtha Raut) who is understandably impatient and her overactive younger brother (Pushkar Lonarkar)adding to the chaos. And there’s also the marriage registrar employee (Bharat Ganeshpure) who doubles up as the narrator of the film.

The initial meeting between Satya and Savi’s families, the latter’s announcement of the dumbfounding condition to test their compatibility are much in sync with the film’s quirky tone. Yet these moments keep you glued to the seats thanks to the various laugh out loud moments. A standout scene is the one in which Satyaprakash and Savitri’s parents bond and pray for the alliance to not fruition. It works as a complete contrast to the usual matchmaking process where parents hope and do their best to make the twain meet.

A relationship can be successful when the partners accept each other’s weaknesses and help to overcome it. Mokashi dwells on this aspect as the lead characters help each other to fight the obstacles prevailing in their respective lives. Savi helps Satya to get the much needed for his solar project, while he helps her to raise funds for her hospital through social media.

But there are times when one gets the impression that the makers are trying too hard to be funny and quirky. Subsequently, certain scenes come across as loud and so do the characters that are a part of it. The conflict between Satyaprakash and Savitri lacks heft and could have been handled in a better way.

Lalit Prabahakar and Mrunmayee Godbole share a warm chemistry that makes their characters and performances even more relatable. The rest of the cast members also do a fine job though they appear loud at certain places

Despite its shortcomings, Chi Ka Va Sau Ka has several enjoyable and laugh out loud moments. If you are in the mood for some laughs and need to get over your everyday blues, then do give it a try.