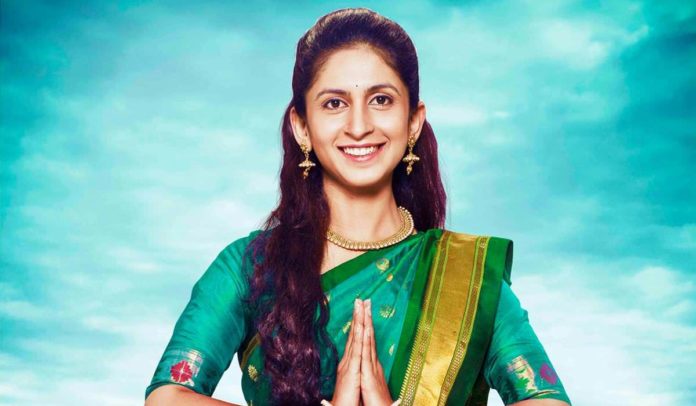 Mrinmayee Godble was earlier seen in critically acclaimed Vees Mhanje Vees and Rajwade and Sons. Her next film “Chi va Chi Sau Ka” will be releasing this Friday. The Paresh Mokashi directed light hearted film has already created buzz as it marks the debut of Television heart-throb Lalit Prabhakar.

Tell us about your experience of working with Lalit?

We didn’t know each other before we started working for this film. As I am not an ardent fan of Marathi serials, I haven’t followed his work on the television. But I knew that he is a very popular household name due to his TV series. We both belong to theatre basically and we are passionate about acting.  Though this is Lalit’s first film, he is more experienced than me in front of camera. Because of his day today shooting for a TV serial he has great camera presence and understanding of the medium. This made very easy for him to adjust on the sets. Lalit motivated me and encouraged me for better work. A costar has to be very supportive, as I believe acting is not just saying your line and be done with it, but it is primarily reacting to what person in front of you is saying.

Tell us about your role and also how did you prepare for it.

This is a romcom- a comedy with a romantic angle. I am playing role of Savitri, she is a veterinary doctor and this is not just a profession for her. By nature, she is an animal lover and Lalit plays role of an environmentalist. Both of our characters have very strong principles which will create some unimaginable situations for us as well as for our families.

Interestingly, I and Lalit both are Kung Fu players in the film. Lalit has been learning this type of martial arts since sometime. But I have to learn Kung Fu for this film. As I was a national level basket ballplayer and also done Kalaripayettu ( Kerali martial Arts) so it became very easy for me to follow. Lalit and I had taken out Kung Fu sessions together where Paresh (director) and Madhugandha (writer) also joined us. This it worked as an ice breaker for all of us. As we started practicing together, we also get to know about the film and our characters. It was more like workshop and certain amount of chemistry was built. We had lots of fun on the sets, but at the same time we all were very professional and did out homework required for the shoot.

Paresh and Madhugandha have consistently delivered us good content driven cinema with a hard hitting message. How was your experience?

In my earlier film, Vees Mhanaje Vees, Madhugandha played a very small role and we met each other during the shoot. So far I have done the films which are not just about the entertainment but also has a very strong message which I would like to give out personally as well. Rajwade spoke about youth and its problems. Vees Mhanje Vees was about education scenario in rural Maharashtra. Chi vs Chi Sau Ka talks about animal welfare and environment, but this is not a very prechy film. The core of the film carries a message but it is wrapped in a complete entertainment package.

Paresh is a great director as he understands what an actor wants and actors are really vulnerable, and emotional. It is very imp for the director to be more compassionate, patient and clear in the communication. It made things a lot easier. He has very nice great healthy one -on-one relationship with all of the cast members. I have a great respect for him, but for me he is a great friend and very approachable for an actor.

Are you an animal lover in your real life as well?

Oh yes, I have two dogs at my Pune home. They are called Cyrus and Munshi. I have also adopted a dog at Mumbai residence.. He is very curious by nature so we have named him Sherlock. I have always been fond of animals. We shot at an actual animal rescue shelter in Mumbai. This was a great learning experience for me. I spent long time during shoot at this shelter, and observe how the animals are rescued, treated and relocated. I learnt a great deal about the animals and the cruelty of the human beings. This will help me in the future whenever I will see an animal torture.

Tell us about your future projects.

I am doing a bilingual film in Hindi and English directed by Kranti Kanade. His film revolves around a prestigious drama competition- Purushottam Karandak in Pune. I am looking forward for this film as the subject very close to me. I have also done a very small part in Akshay Kumar starrer Batman. Also, in theatre I am performing three plays. One is with Paresh Rawal called Dear Father (in Hindi and Gujrati) and another is an experimental play in Marathi with Asakt Kalamanch, a Pune based group. I am also doing a Hindi play based on the subject of Palestine. As the film will be releasing this weekend, I will resume my theatre work very soon.

Mrinmayee, Thanks for sharing us your thoughts about the film.  We wish you a best luck for the release of the film.