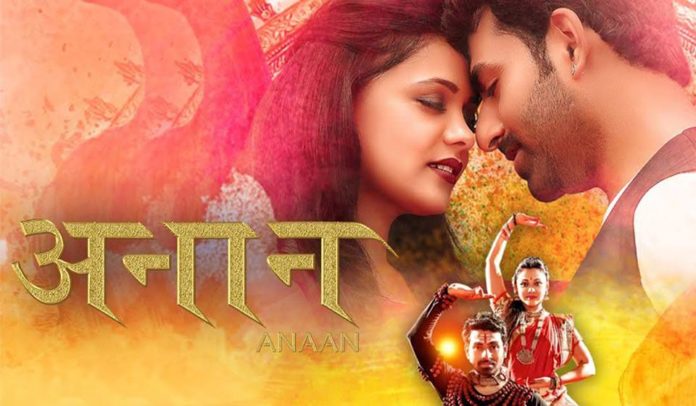 The start of the film suggests an over the top thriller. But soon we realize that it’s just a back story. However the man introduced as villain is set to return. Shilpa Tulaskar (called as Didi) & Uday Sabnis (Didi’s friend/philosopher/brother?) rescues a newly born girl child which the villain wants to kill. That child is considered a sin. So that child grows up as Prarthana Behere. She is a passionate classical dancer trained under Didi (Tulaskar) who is a classical singer. The trailer of this film hinted a few traits of lesbianism. The first half shows a few scenes that could be letting us towards it. But no, it’s an altogether different theme that this film concerns itself with.

On paper this theme itself is extremely ambitious. But this film never manages to understand its magnitude. The treatment ruins every possible chance of taking the theme & the film seriously. One of the most irritating characters in this film is portrayed by Sukhada Deshpande. She plays a German woman who is interested in the mythology of Shiva & is here in India for arranging a classical dance show with the theme of Shiva. She plays a German woman who speaks English & Marathi in a Puneri-American accent. In one moment she is on the phone saying she has booked her tickets for Amsterdam & then in the very next moment she tells a fellow character that she is going back home. What has Amsterdam got to do with her home (in Germany)?

This film keeps screwing up with geography throughout. The villain speaks in Hindi-Marathi with an overdose of Rajasthani dialect. The places in the story are not at all defined. In the all important climax the film shifts locations like they are just a prop on a stage. Everyone ends up being at the same place without even knowing each other’s whereabouts!

The title of this film ‘Anaan’ isn’t justified almost throughout. During the final dance performance I still managed to find out what it actually means. Let’s say it would be a spoiler to reveal it here. All I can say is that ‘Anaan’ is an abbreviated form of one of the many names Lord Shiva has, which also represents the conflict of the protagonist of this film.

We see the film throwing in Lord Shiva’s myth in between for effect. This film could not even get any grace points for a ‘different subject’ because it simply makes everything laughable. For example there’s a character in this film that has been attacked by our villain by a knife on the neck! But guess what? The other characters never even consider filing a police case! They pretend it’s an accident & move on with their lives. They are completely aware that this villain is on his way to kill the protagonist, yet no police in the picture whatsoever! Why? What kind of fairy land is this film set in?

Then there’s another sub-track of our hero. He is a passionate classical dancer who considers his art as his girl friend. This philosophy of his doesn’t even last the first half of the film. His father has fixed his marriage with his friend’s daughter. This daughter is another gem when it comes to bad characterization! She is obsessed with our hero for no specified reason. Her father in the climax scene says that his daughter is very ‘aggressive’ & she can do anything if she doesn’t get to be our hero’s bride! My point is that by common sense her character was made this way to make the police think that the attacks are done by her! But as I told you, there is no police!

Lets pray to Lord Shiva that Marathi cinema gets over this really bad phase that it is going through right now.