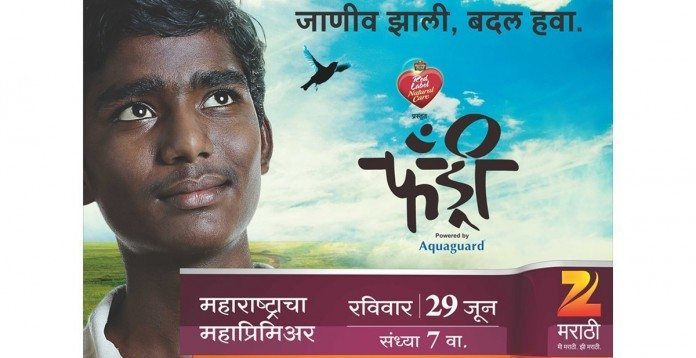 The National Award Winning and critically acclaimed movie ‘Fandry‘ will premiere on ‘Zee Marathi’ on 29th June 2014. Going beyond the gamut of vanilla promotions, Zee Marathi has endeavored to make a difference through Fandry. The campaign woven around the concept ‘Jaaniv Zhali, Badal Havaa’ aims at bringing about change in society and making a difference in the lives of children. The channel has tied up with 10 NGOs that work in the area of children development and protection and will raise funds for these NGOs through the movie. This will be done through special break content that has been created for the movie. The channel has roped in some of the most popular Marathi actors to pledge their support for this cause and thereby create awareness and raise funds towards the cause of these NGOs. Some of the celebrities who will be part of this campaign include Nana Patekar, Sonali Kulkarni, Urmila Matondkar, Sachin Khedekar, Makarand Deshpande, Sachin Pilgaonkar, Atul Kulkarni, Amol Gupte along with vereteran Artists Vikram Gokhale and Dilip Prabhavalkar. These artists will support NGOs across Maharashtra; working towards the cause of children in varied areas. Some of these NGOs include LokbiradariPrakalp (Gadchiroli), Snehankur (Ahmednagar) EklavyaNyas (Pune), Narmadalay , Qest : Quality Education Support Trust (Solapur), PunrutthanSamarasataGurukaul (PimpariChinchwad), Hamara Foundation (Mumbai) to name a few.

In addition to the above, the channel has also started a social media campaign through Facebook titled as ‘JaanivZhali, BadalHavaa’. As part of this initiative, all the Facebook users have to do is click on pledge tab called ‘NirdharBadlacha’ (Pledge for CHANGE) and register their support for the campaign. For each pledge Rupee 1 will be contributed towards the cause of these NGOs by Zee Marathi. Through this initiative Zee Marathi aims at building the reach of the campaign as there is no cost involved to the user.While the viewers will be voluntarily donating to the NGOs, the channel will definitely contribute to the cause.

Speaking on the initiative, Mr. Deepak Rajadhyaksha, Business Head, Zee Marathi said “Charity begins at home and hence the Zee Marathi family felt it was right for us to donate a sum of Rs 5 lakhs towards the cause. We believe our viewers will support this noble cause and add a smile on the faces of the many children across Maharashtra.”

Pledging support to this cause is Zee 24 Taas who will run a few special features on the NGOs and interview the artists associated with the cause. Also lined up is the interview with Nagraj Manjule, the director of the movie who based this story on true happenings in his native village. The movie produced by Esselvision stars Somnath Avaghade as Jabya apart from Kishor Kadam and Nagraj Manjule who plays a cameo in the movie. ‘Fandry‘ has won critical acclaim and won awards at many international film festivals apart from the coveted National Award.