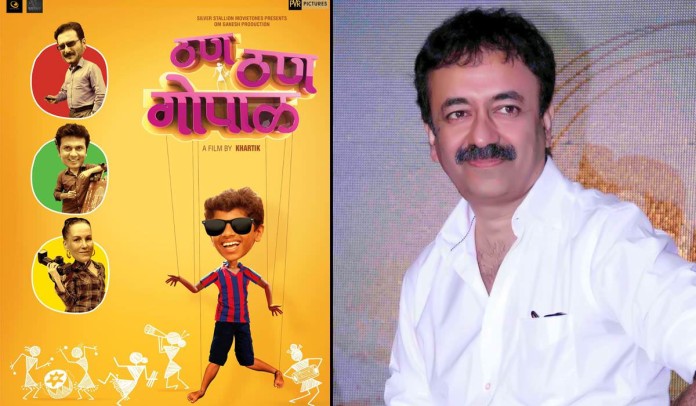 Than Than Gopal- a film directed by Kartik was recently praised by none other than Bollywood’s most successful director Rajkumar Hirani after a special screening.
“Though this is a first attempt of direction by Kartik, the film has turned out very well. I have specially liked Vivek Chabukswar who plays role of a blind kid. It was a very challenging role, but he has done a commendable job,” commented Hirani after a special screening.

The film is directed by Mumbai-born Kartik Shetty. He has learnt art of film making from Digital Film Academy. He has acted in many Hindi and Kannada plays. The concept of this film was given to him by Sameer Bhosle and Kartik decided to make this into a Marathi film as Marathi audience always give preference to such strong content. The film is produced by Siddhant Shetty, Nidhi Shetty, Shriniwas Shinde, Rahul Pote and Vijay Shetty under the banned of Om Ganesh Productions.

The plot of the film revolves around a blind eleven-year old boy who befriends a Warli painter, and how his life takes a turn. The film stars Milind Gunaji, Milind Gavli and Vivek Chabukswar in lead roles. The film also stars German actress Suzan Barnett in a very important role.

The film releases on 30 October all over Maharashtra.