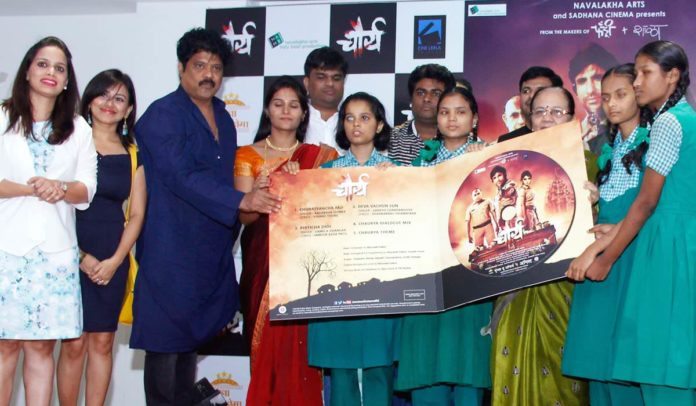 Chaurya is one of the more interesting Marathi films to release in the coming month. The film isbased in ShaniShingnapur wherein the villagers believe their local deity will punish any person who commits a theft. So the houses there don’t have any doors or windows. But one day, to the shock of the villagers, a big theft does take place and then the film goes on to investigate this matter. Chaurya is full of suspense and thrills.

Another special aspect about this film is that Chaurya is the first Marathi film to be released in the Accessibility Format. This format helps deaf and even blind people to enjoy the experience of a film. The music was launched at the event at the hands of the students of the blind school Kamala Mehta Blind School.

At the launch of the music the composer MayureshKelkar said, “I am working on this film from the day one so I knew about the characters in the film and we created the title song of the film first. Then we returned to the  rest of the three  songs for composition. These songs were recorded with the voice of AadarshShinde, UrmillaDhangar and Dr. Ganesh Chandanshive  and the lyrics are by Sameer Asha Patil , ShankarraoDhamnikar and Vishnu Thore. All the three songs are of a different genre and will be liked by the masses.”

The film has been produced by Navalakha Arts and Sadhana Cinema in collaboration. The film stars Kishore Kadam, Ganesh Yadav, Pradeep Velankar, MilindShinde, DigvijayRohidas, Dinesh Lata Shetty, JayeshSanghavi, TirrthaMurbadkar andShruti Kulkarni. The camera department is helmed by the duo SrishalHiremath and JitendraPandit. KetanMadivale has done the editing. The art direction is by Raja Dagar and the choreography is by Ganesh Chandanshive and Bhakti Naik.