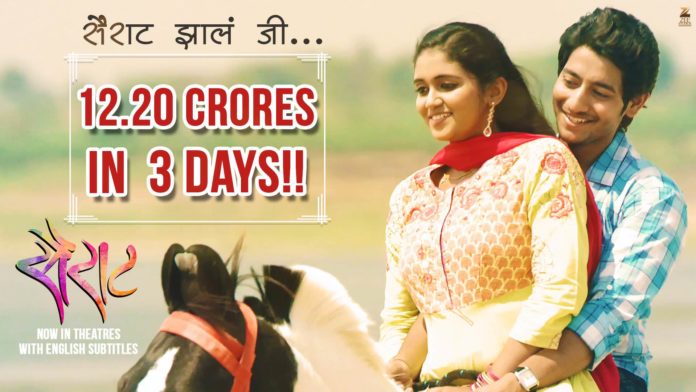 Sairat, a film by Nagraj Manjule has become the highest grosser in its opening week. The film has minted more than 12 crores in the first three days of the release. Sairat continues to hold strong on the first week of release.

Sairat- a love story of an inter-caste couple was promoted heavily in Maharashtra by Zee Talkies. The promotions and marketing seems to be paid off as film has been running housefull in bigger cities and small towns equally. The film introduces two newcomers- Akash Thosar and Rinku Rajguru. Their screen names – Archie and Parashya have become a rage among the teenagers.

The music composed by Ajay- Atul have already become a hit and the film has also followed same footsteps. The film also has created a storm on social media. As Sairat started getting more booking by the audience, Tiger-Shraddha’s Baaghi has suffered as theatre owners have increased shows for Sairat.

We congratulate entire team of Sairat on this fabulous Box office opening and we hope that film creates a history on the Box Office.