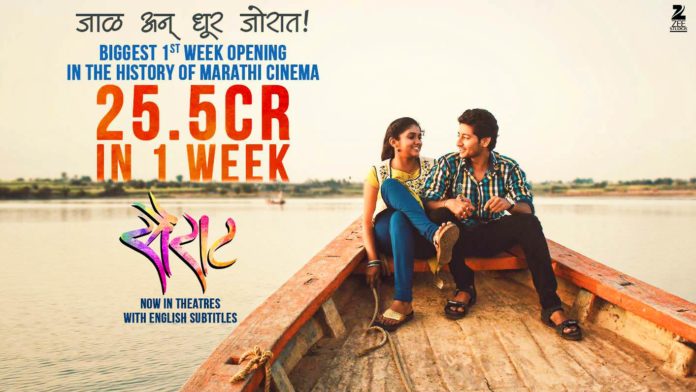 Sairat has managed to break the box office record for the first week for a Marathi film. It has grossed a whopping Rs. 25.5 crores in one week!

Sairat had broken the first weekend box office record of  as well by grossing Rs. 12 crores. Generally, after the hype of the promotion dies down, a film doesn’t register as much collection after the weekend is over. But this has not happened with Sairat. Yes, it was massively promoted by Zee, but the word of mouth of the film is very positive. This has ensured that the theatres remain full on weekdays as well. Theatres have actually increased the number of shows of the film in the second week – a rare feat in today’s times indeed.

Another special feature of the release of Sairat is that it was released outside Maharashtra in cities like Bengaluru, Hyderabad, NCR, Surat etc. and the film has done well there also. It has entered the second week in most of these cities.

The previous record of Rs. 15 crores for one week collection was held by Natsamrat which Sairat has overtaken by a mile. Trade analysts believe that the film is on its way to become the highest grossing marathi film ever and they predict that the lifetime box office collections will be Rs. 50 crores.

Now, this certainly is very good news for Marathi cinema which hasn’t had a clear box office hit post Natsamrat.