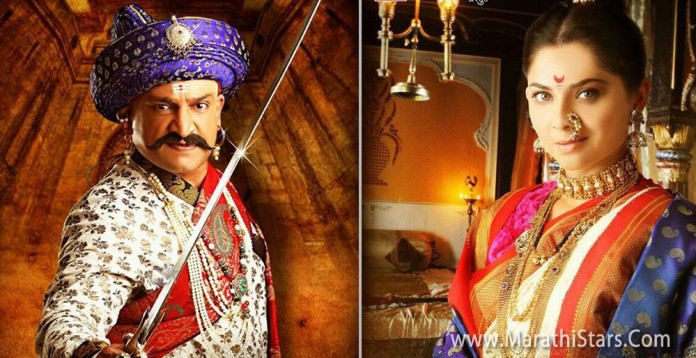 Rama Madhav, an ambitious cinema directed by Mrunal Kulkarni will feature famous Marathi actors Prasad Oak and Sonalee Kulkarni as Raghoba dada and Anandibai. The movie is produced under the banner of ShivamGemin Enterprises Pvt. Ltd. Rama Madhav will be releasing on 8 August all over Maharashtra.

Raghobadada Peshwa is one of the most complex charecters of Maratha History. He was very brave, although always side-lined due to court politics. While speaking about this role Prasad said, “I had never done any historical role in my twenty year career. I always wished to perform such role. When my dear friend Mrunal approached for this role, I was thankful for her. This was a completely different experience for me. My first co-actor in television was Mrunal and now she has directed me. Raghobadada has various shades as short-tempered, loving husband, plotter and yet very brave. Portraying all these shades on one role was amazing, I hope audience will like me as Raghobharari.

Anandibai, wife of Raghobadada was known for her beauty and her intellect. Sonalee Kulkarni will be enacting this challenging role. She was not interested in court proceeding till the death of Madhavrao Peshwa. However, post his death, Anandibai becomes a prominent person in the politics. While speaking about her role, Sonali said, “I was really happy to be a part of historical Rama Madhav love story. This role has some negative shades and hence it was really unexpected for me. For the first time I worked under a female director and the experience was enthralling.”