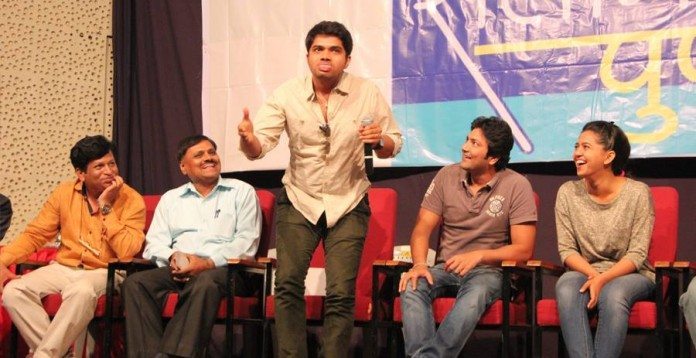 Various cine-goers appealed to critics not to present deliberate negative reviews as it affects the entire Marathi movie industry in a function arranged by Salaam Pune. The cast and crew of “Aandhali Koshimbir” was present here for an interaction.

Many from the audience voiced their views about recent trend of writing damaging reviews of Marathi movies. “Audience decides to watch a movie after reading its review; however, it is disheartening to see many critics are writing negative reviews purposely. This harms not only Marathi movies but entire Marathi culture and language. Hence, we would like to urge people not to make their minds by reading a review, but by watching it.” Audience also commented that these critics enjoys unrealistic stunts and plots from other languages, but expect Marathi movie should be hundred percent realistic.

While talking about movie, Anand Ingle and Aditya Ingle said, “This is not just a comedy movie. It is about what happens when a different type of people come together. As all the actors have done an excellent job, we are very much sure that audience will love to watch this movie twice.