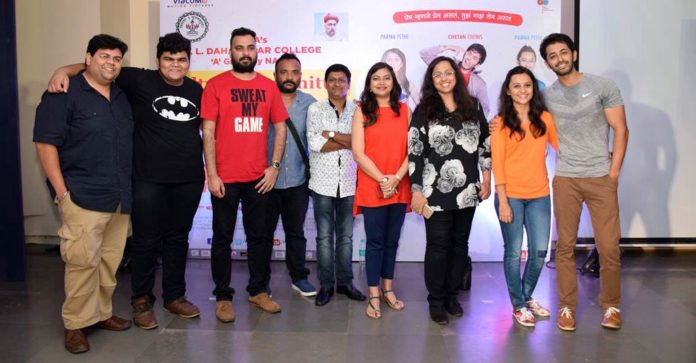 The youth of the society have always been the target audience of any film industry. The young audience, more often than not, make or break a film’s success at the box office. So it makes sense to make a film for the youth.

Marathi cinema in the recent past has consistently targeted the youth with its adolescent love dramas.The soon to release film Photocopy starring Parna Pethe and Chetan Chitnis is also a college romance.The music of the film was launched at the popular Dhanukar college in Mumbai. This is certainly a smart way of promoting your film by directly collaborating with colleges. The principal of the college Pethe Madam launched the music of the film to the excitement of the crowd. The cultural committee of Dhanukar College organised the music launch which was attended by the cast and crew of the film. The talented and highly enthusiastic students of Dhanukar treated the audience with energetic dance performances that ranged right from a devotional dance to a crackling performance on Zingat.

Parna Pethe and Chetan Chitnis also shook a leg to the now hit dance number Pipani.The song has been penned and composed by AV Praful chandra. The singers of the hit song Vaishali Samant and Pravin Kanwar were present at the event and treated the audience by singing the first stanza of Pipani much to the pleasure of the audience.The singer-turned-producer Neha Rajpal also spoke a few words about the film and so did the actor-turned-producer Vijay Maurya.

Here’s wishing more such collaborations with colleges to market marathi films and a lot of success to Photocopy for its music andt heatrical release.