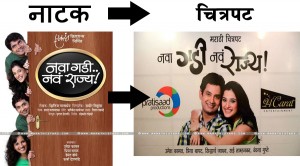 Sameer Vidvaunsh popular Marathi Drama ‘Nava Gadi Nava Rajya’ now on big screen. After the success of drama it will be in movie form.Lead cast of drama ‘Priya Bapat’ and ‘Umesh Kamat’ retained in movie. Saie Tamhankar  and  Siddharth Jadhav will be in other major roles.The shooting has just begun and is scheduled for a Diwali release. Both big banners, 24 Carat Entertainment and Pratisaad Productions will together handle the pre and post production of the movie. Director of Drama Kshitij Patwardhan will direct the movie and also Writen by writer of drama Kishtij Patwardhan.

The story of movie is around four-month old married couple. Theirs is an arranged marriage and now the two are discovering the various facets of each other’s personalities. At times exciting, at times disappointing – the two are unravelling before each other. The entanglement of the couple is endearing and the estrangement – devastating. The evolving relationship between the two forms the basis of this family play. 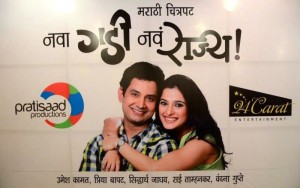 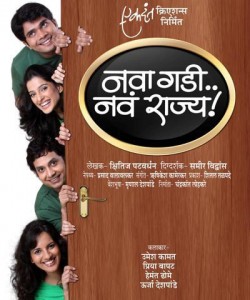