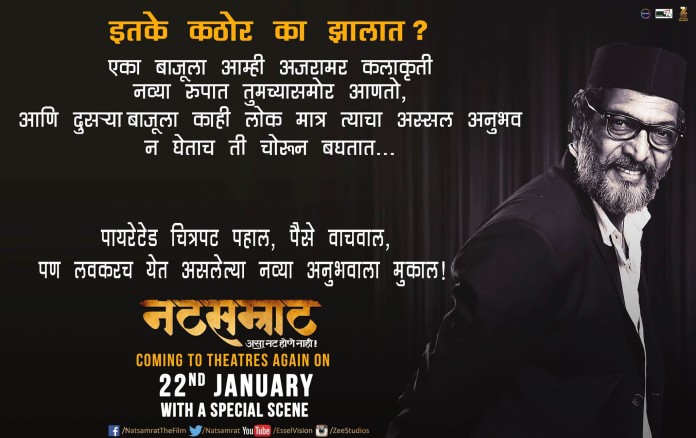 ‘Natsamrat’ a film by Mahesh Manjrekar, gave Marathi Cinema a great opening this year. The film flaunted houseful boards across the state and set a benchmark of third highest grosser film in history of Marathi cinema. It has collected 30 crores in just 2 weeks at box office. Director Mahesh Manjrekar has decided for an amazing treat to all audiences that Natsamrat is going to release again on 22nd January with additional scene.

‘To be or not to be that is the question, Jagava Ki Marava Ha Ekach Sawal, Kuni Ghar Deta Ka Ghar. . .’ the impact of these dialogues has created magic in audience’s mind. Additional scenes of Rambhau and Ganpatrao Belwalkar will definitely accept again by the audience. The scenes of Rambhau and Ganpat’s friendship has present tremendously awesome.

Natsamrat is the kind of cinema that leaves eyes moist and soul cleansed. Even the most hardened and cynical moviegoer would find it hard not to be moved by the plight of the Natsamrat, Ganapat Belwalkar. Director Mahesh Manjrekar has introduced Ram Abhyankar’s character in the film which is an alter ego of the Natsamrat. Vikram Gokhale has essayed the character of Ram with the utmost ease which is getting an appreciation from the viewers. The director has wisely anchor Ganpat’s humane side to his relationship with his best friend Rambhau. While the film is an unabashed showcase of Nana Patekar’s prowess as an actor, Vikram Gokhale as Rambhau is equally compelling. The sequence on his deathbed when Gokhale recites lines from the Mahabharata makes our hairs stand on-end. This is an actor at the crest of his performing ability. The chemistry between Nana Patekar and Vikram Gokhale has been acknowledged by everyone and on the same note director has decided to add one more scene.

Director Mahesh Manjarekar said, “I am overwhelmed with the kind of response Natsamrat is getting, from masses to classes! Making Natsamrat was like dream coming true. Audience loving the Nana Patekar and Vikram Gokhale’s chemistry and hence we have decided to add one more scene of them in the film from 22nd Jan. I am sure that viewers will love the new additional scene. It will be exquisite treat for them.”

Founder and CEO of Zee Studios Nitin Keni said, “The Company that presented and distributed the film said that the success of Natsamrat has moved us; getting third highest grosser position in mere two week is meritorious. This film has a capacity to go far. We have decided to add one more scene in the film and we all are looking forward for it. It is very nice to see that Marathi cinema is growing. The response of Natsamrat has proved how mature that Marathi audience has become. The audience and our team are equal responsible for the success of the film.”

The film is produced by Vishwas Joshi’s Fincraft Media, Nana Patekar’s Gajanan Chitra, The Great Maratha Productions and presented by Zee Studios. This is Nana Patekar’s first venture as a Producer. The star cast of this movie comprises of Nana Patekar, Medha Manjrekar, Vikram Gokhale, Mrunmayee Deshpande, Neha Pendse, and Sunil Barve. The movie is released all over on January 1st 2016. The film is running successfully in 375 theatres with 800 daily shows. Now Natsamrat movie is again releasing with additional scene on 22nd January 2016.