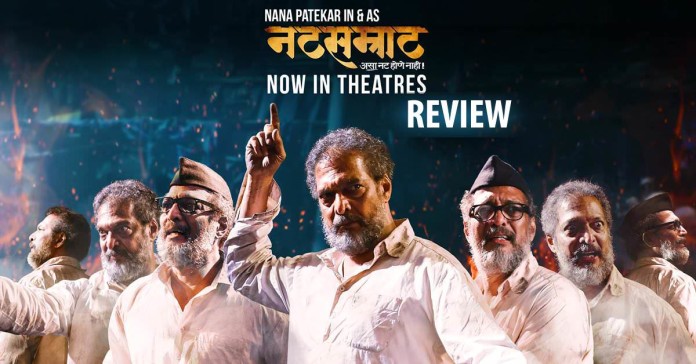 Marathi theatre has had a rich history and it certainly is a good sign that filmmakers have started digging into the treasure trove of classic marathi plays. Like the hit Balak Palak and the recently released Katyar Kaljat Ghusli, Natsamrat too is an adaptation of the eponymous play written by the legendary V. V. Shirwadkar.

Natsamrat (which roughly translates to ‘king of the theatre’) is about a Shakespearean actor by the name Ganpatrao Belvalkar who has finally called it a day on his long and illustrious career. With the aim of living a peaceful retired life devoid of any financial responsibility, he also gives away practically all his possessions to his children – Makarand and Vidya. He trusts his children to take care of him and his wife Kaveri, whom he fondly calls Sarkar. However, his children do not live up to his trust.

Now, the play might have been highly acclaimed in its time and might have also touched the hearts of many, but the core of the story since then has been recycled so many times in numerous movies, plays and tv serials that it has lost its novelty and, thus, its capability to move you. An old couple being nudged out of their own house by a scheming daughter-in-law is done to death to say the least; there isn’t either any freshness in the way that plot point is approached. The whole plot has a ‘been there done that’ feel to it and most of it becomes very predictable even to someone who has no clue of the play. Few scenes even remind you of one of those several daily soap on Indian television. What saves the film from becoming a run of the mill melodrama is Nana Patekar, the character sketch of Ganpatrao Belvalkar and the banter between Ram Bhau (Vikram Gokhale) and Ganpatrao.

Patekar, here, has undoubtedly given one of the best performances of his career. He has said that it is his dream role in the interviews and you can see that he has given it his all. Ganpatrao Belvalkar has been played by Dr. Shriram Lagoo, Satish Dubashi and Dutta Bhatt on stage, and these performances have been etched into the memory of the theatre crazy public of Maharashtra. Nana Patekar’s portrayal of the character won’t be easily forgotten, either. He makes the character his own, you cannot help wondering whether there would have been any other actor playing it on screen. There are broadly three stages through which Ganpatrao’s character goes through. The first is the retired theatre veteran, a bit of an odd ball who does not mince his words, but at the same time dotes on his granddaughter. The second is the emotionally hurt old man, who has softened a bit after his son abandons him, but is relieved to have found refuge in his married daughter’s home, along with his dear wife. And the third is the homeless street dweller, bordering on lunacy having lost his wife and devoid of any support from his children, and rambling around the streets of the city with only Shakespeare on his mind. Nana Patekar is as riveting as he has ever been. It is definitely a difficult task to match this powerhouse of a performance, but apart from Mrunmayee Deshpande and Vikram Gokhale nobody else in the cast makes much of an impact. This might also be alluded to the fact that none of the other characters were as fleshed out.

Now, stage drama and film are quite closely comparable, but only on the surface. Film certainly has a much greater narrative capability, but on the other hand one great advantage theatre has over film is that it is live. Despite the seemingly similar forms of medium there certainly is a marked difference between the two. So, to convert the screenplay of a stage drama into one for a film is a crucial job. The conversion here does feel a bit awkward at times. Most of the many soliloquies in the film come across as theatrical. Though Nana Patekar delivers them with an immense force which you can’t help but take notice, the desired impression is not made. None of them moved me much, let alone pierced my heart or anything of that sort. However, there are a few scenes like the one in which Vidya mistakenly accuses her father of stealing her money that do leave you teary eyed.

Natsamrat, thus, isn’t an entirely smooth adaptation on screen. The treatment to the core of the story from the 1970s lacks any freshness. Nana Patekar, however, is in sublime form. His masterful portrayal of the ageing, blunt and straight-forward Shakespearean actor who once ruled the theatre but is later mistreated by his own children, single handedly saves the film from being just another family melodrama.