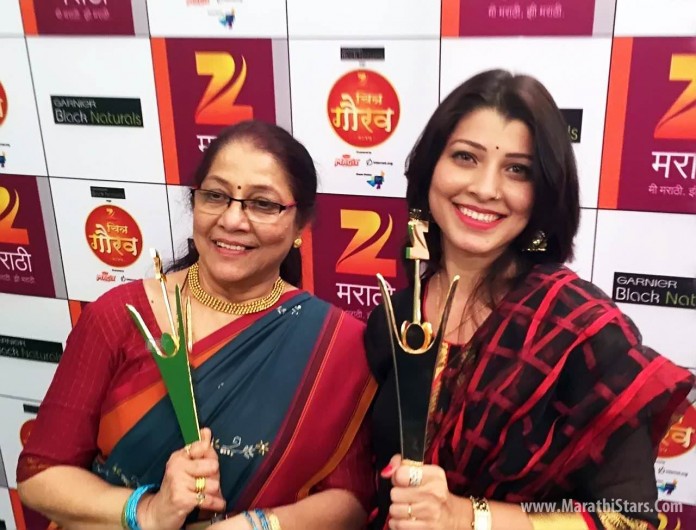 Zee Gaurav 2015, recently awarded Tejaswini Pandit and Jyoti Chandekar for Best Actress and Best Supporting actress for the film Ticha Umbaratha. This is for the first time a real life mother daughter have been awarded for their work in one film. The film is written by Jayant Pawar and directed by Pradeep Ghonsikar. Famous action director Ravi Diwan has produced this film.

Jyoti and Tejaswini have portrayed the roles of mother-in-law and daughter-in-law in this family drama. The film had received nominations in Best Writer, Best Actress, Best actor in a negative role, Best Supporting actress and Best Costumes. The film was also chosen in Best Cinema Today category for PIFF, and won two awards in Sangli International Film Festival.

The story of the film revolves around Vibhavari, a urban middle class housewife enjoying a perfect family life. However, suddenly she has to go through an emotional crisis and deal with a decision. The film also stars Chinmay Mandlekar, Harsha Khandeparkar, Suyash Tilak, Tulika Prakash Nikam, Bharat Sharma, Shital Shukla, Abhinay Patekar. The art direction is done by Nitin Desai and director of the photography is by Yogesh Jani. The music has been given by Shreyas Preet.

The film will be releasing in theaters very soon.