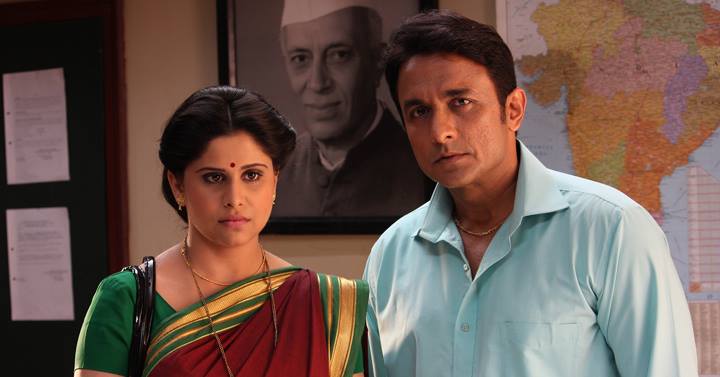 One’s own home, near and dear one’s and one’s own identity; these are things every human being craves for. But when he or she loses all these things which are dear to his/her heart, the whole world collapses. Upcoming Marathi film Sau. Shashi Deodhar is based on the life such common middleclass woman who faces similar challenge of losing her whole world. The trailer of Sau. Shashi Deodhar has been creating waves amongst the cinebuffs. Sai Tamhankar who has essayed glamorous and bold roles in earlier films is playing the role of a middle class married woman in the film and her character has created quite a lot of curiosity among the cinegoers. Her character in film is restless due to the many challenges she is facing at a time. The film has the fine blend of varied emotions such as thrill, suspense and the search to find out the truth and the audience will have the opportunity of watching a content rich suspense thriller after a long time. The film which is slated for a release on February 21st is produced by Shilpa Shiordkar and her second inning in the film industry is creating a curiosity. Shilpa’s husband Aparesh Ranjit and Neeta and Krishna Shetty has given great contribution in producing the film.

The film is produced by Needledrop Productions Pvt.Ltd and Orange Tree Productions Pvt.Ltd. The film is directed by Amol Shetge. The film stars well known actors from the Marathi film industry such as Ajinkya Deo, Tushar Dalvi, Avinash Kharshikar and Sai Tamhankar. The story of the film which creates curiosity amongst the audience right from the beginning is written by Shetge himself. The screenplay of the film is penned by Sharvani –Shushrut and its dialogues are written by Kaustubh Savarkar. The Director of Photography is Suresh Deshmane who has done an amazing job with the camera. The lyrics are written by Ashwini Shende and music of the film is composed by Tabby-Parik. Noted singer Mahalakshmi Iyer has sung a song which beautiful words like Hathi Tujhe Gandha Yave,Shwasani Thambun Jave…Aplya Juna Olkahila Navese Rang Chadhave. Breathless fame singer cum music director Shankar Mahadevan has sung the Guntale Shwas hey, hoti tujhe har tarf bhas hain. Suresh Pai is the co-producer of the film. Shilpa who is a granddaughter of veteran Marathi actress Meenakshi Shiordkar has already created a mark in the Bollywood with her brilliant acting skills. Now along with her acting her second inning in the films as a producer is winning accolades in the film industry.
Sau. Shashi Deodhar is slated to release on February 21st.