In order to make the scene look interesting, action directors Stunt Silva and Nikhil Mahajan came up with the idea of shadow fighting. The scenes are shot in such a way that the action is showcased via shadows.
Though the whole sequence was difficult to shoot, the way it was executed is something which will pique the audiences’ interest. 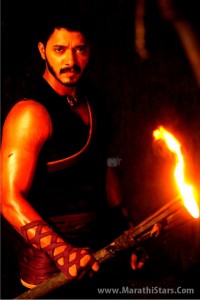 Shreyas is all praise for the act.

“When Stunt Silva and Nikhil Mahajan told me about the idea of shadow fighting, I was very excited and it was something which I have never done before and was challenging. In order to get the sequence correct, we had done intense training not only practising shadow fighting but also my body posture, my stance and sword training,” Shreyas said in a statement.

The film boasts some never before seen action sequences. All the stunts in the film have been performed by Shreyas himself.

Baji, the lead character, is an action-adventure laced superhero-vigilante who takes it upon himself to protect the common man against oppression and injustice in this small village of Shrirangpur.