Team Vrundavan celebrated International Women’s day event at Vrundavan Society in Thane. Raqesh Bapat, the dashing hero of the film and Vaidehi Parsurami, his leading lady danced on the steps of “Dashing Govinda” in the event. 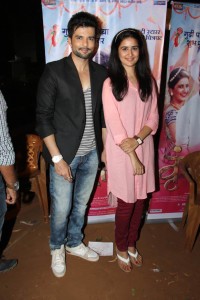 The film revolves around a family which stays in a bungalow called “Vrundavan” hence it was very apt that the team visited Vrundavan society. The members of the society enjoyed the evening. The women of the society played fun games with the celebrities. Vaidehi also interacted with these women and shared her motivations and inspirations with them. The film also makes an important point about women’s place in a family and hoe education is more important than marriage.

The co-producers Amit and Angha Karkhanis were also present for this event. The film Vrundavan is directed by Southern director TLV Prasad and produced by Realistic Film Company.

The film releases on 8 April all over Maharashtra.