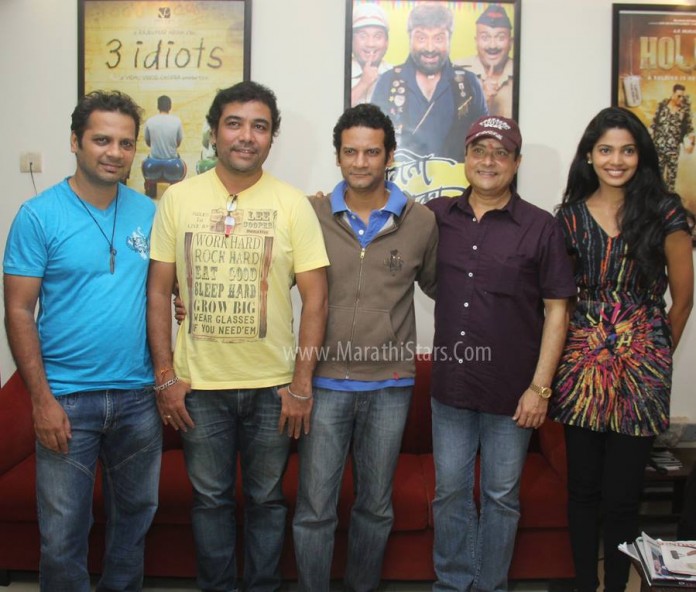 ‘Fantastic’ Laavni sung by Urmila Dhangar from ‘Sanngto Aika’ a film produced by Vidhi Kasaliwal and directed by Satish Rajwade was released on Sunday, August 17. The release was coincided with the birthday of superstar and evergreen actor Sachin Pilgaonkar, who is playing lead role in the film. The Laavni-cum-item song is the talk of the town due to its never-before combination of concept, music, lyrics and picturization.

Sachin ji , who believes in keeping his birthday a low key affair, was dubbing for Sanngto Aika at a studio on Sunday. The production house decided to take the celebration to the dubbing table where the Laavni and Sanngto Aika film poster were released by Sachin Pilgaonkar.

While talking about the song, the music directors Avinash & Vishwajeet said, “Director Satish Rajwade wanted an out of the box Laavni for the film. He wanted lyrics that would appeal to the young generation. After due deliberation with lyricist Guru Thakur, he wrote ‘Fantastic’ which is a combination of a Laavni and an item song. The English words featured in the song are appealing and at the same time represent today’s Laavni artists who do not hesitate using them in routine conversation.”

Guru Thakur said, “We wanted a punch, and no obscenity, in the song. At the same time we wanted it to be youth-centric as well as to be enjoyed by every member of a household. The lyrics of the song are in sync with our objective”.

For Singer Urmila Dhangar, it was a never before experience. “I was working for the first time with Avinash-Vishwajeet ji . When they first approached me, my voice had turned hoarse and I was not in position to sing. Even after ten days, I was forced to turn them down due to an unfavorable voice condition. They waited for me for few more days, which is unusual in the industry. When we recorded it after fifteen days, I realized that it had come out as a masterpiece,” she said.

Director of the film, Satish Rajwade, has commended the music directors. “They know exactly what I want in my film. We share a good rapport as we have done a number of films together. We wanted to compose a hit Laavni and I think we have succeeded in our intention.”

Landmarc Films has successfully engaged leading actors and technicians for the film. Apart from Superstar Sachin Pilgaonkar, Bhau Kadam, Vaibhav Mangale, Jagganath Nivangune, Milind Shinde, Pooja Sawant, Madhav Abhyankar, Sanskruti Balgude and veteran actor Vijay Chavan are part of the star cast. Story and screenplay by Parag Kulkarni, while Sanjay Pawar has written dialogues of the film. Noted director Satish Rajwade, who has hit films like Premachi Goshta, Mumbai Pune Mumbai to his credit, is directing the film which will be release on 2nd October 2014 all over Maharashtra.