Eka Lagnachi Teesri Gosht – a story about a modern day couple and their struggle through the relationships and family was one of the best daily soaps in Marathi. The show starred Umesh Kamat and Spruha Joshi in a lead pair and has a fantastic run on Zee Marathi. The popularity of this show has reached another benchmark as it has been dubbed in Hindi and telecast on Zee TV. The multistarrer TV series also has some of the well known faces of the TV industry like Mohan Joshi, Mohan Agashe, Shubha Khote and Shubhangi Gokhale. This is the first Marathi show to be dubbed in Hindi on Zee TV. 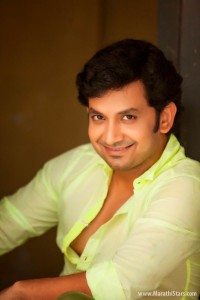 Sharing his experience on the same the protagonist Umesh Kamat said, “I am thrilled about the television debut of our show in Hindi. The show is very close to my heart and I hope to receive the same love from the audience like I received for Eka Lagnachi Teesri Gosht.”

The story is a mix of romance, comedy combined with drama that is surely making buzz around the viewers. To know more about the show catch Mile Sur Mera Tumhara Monday to Friday at 5pm only on ZEE TV.