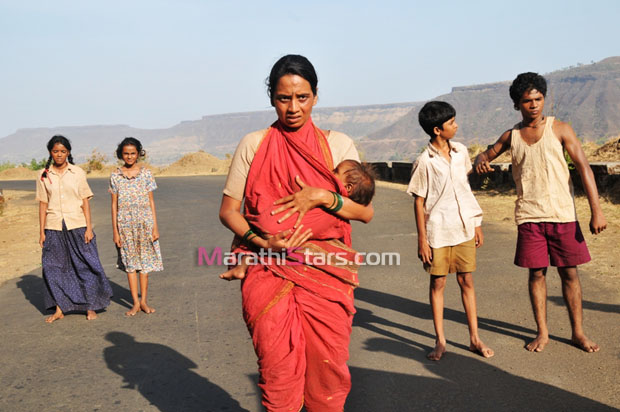 After taking the world by storm with their first production, the blockbuster OMG OH MY GOD!, Grazing Goat Pictures co-producers, Akshay Kumar and Ashvini Yardi, are all set to release their first debut regional / Marathi cinema project, 72 MILES: EK PRAVAS, setting the date as 26th July 2013.

A hard-hitting, poignant tale of a young boy who makes his journey into self-actualization against the backdrop of a rustic India, 72 MILES: EK PRAVAS explores a beautiful, coming of age journey for the 13 year old boy Ashok and the companionable relationships he makes through his journey.

This film aims to transport the audiences into post-independence India as experienced by the protagonist Ashok.

Akshay and Ashvini are confident that their film will touch the hearts of audiences and give them a visual introspect of Ashok Vatkar’s autobiography. Inspired from the novel with the same name, 72 MILES: EK PRAVAS explores the impact of a woman named Raddhakka, on protagonist Ashok.

Spearheading investment into quality, subject-driven, film-making, Grazing Goat Pictures is taking Hindi and regional cinema to new heights with a range of innovative and fresh projects. Renowned for thought-provoking, unique and emotive film making across boundaries and genres, Grazing Goat Pictures delves deep to bring the audience films that are cutting edge and high-concept, resonating with multiple audiences domestically and across shores.

Akshay Kumar says: ’72 MILES marks our first regional film and we’re delighted to announce the release date. Marathi isn’t my first language but living in Mumbai I picked up the language very quickly and immersed myself in the culture. I’ve seen some really interesting Marathi projects and love the cinema. I am personally touched by the story of 72 MILES and I hope the audience likes it as much

Ashvini Yardi says: ”It was my dream to produce a period film and with 72 MILES, I have had the chance to do so. This subject and the plot of the film is so thought-provoking that it forces you to completely engage in the film, connect with the characters and grow with their thought. What’s more it’s by the same director of Jogwa which won 6 national awards. Akshay and I are very proud of this project and the opportunity to be able to produce such a marvellous film. The film will definitely engage with international audiences despite the language barrier and will let them in on our heritage, our culture and a panoramic setting of post independent India. I am sure the Marathi audience will be proud of this film.’