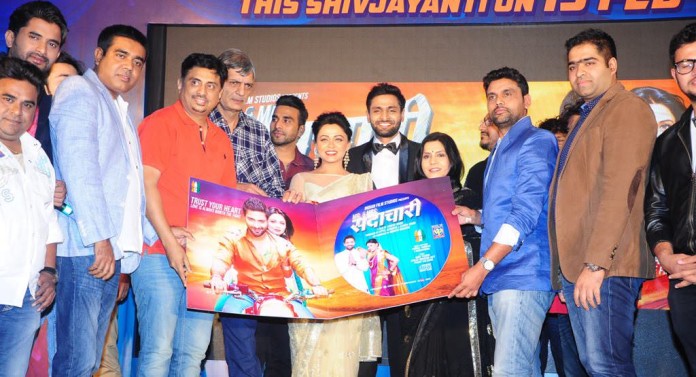 Indian Film Studios presents ‘Mr. & Mrs. Sadachari’ is a buzz now a days. Ashish Wagh director of this movie also produced this movie with Utpal Acharya. Even though it is first film of Ashish Wagh, he has presented it very well. Vaibbhav Tattvavadi  & Prarthana Behre are in lead role of this film and with them actor Mohan Joshi, Pradeep Velankar, Vijay Andalkar, Uma Sardeshmukh, Uday Nene, Sumukhi Pendse, Prasad Jawade, Anuja Sathey and Kanchan Pagare are also playing important role in this movie.

The movie has shoot at different wonderful locations like Mauritius, Mumbai & Kolhapur. It has sweet, romantic, dashing and emotional kind of songs. V. Hari Krishna is music director of this film.

Recently music launching event was held in Mumbai in the presence of entire star cast of this movie and media. In this event star cast interact with media and audience and this event got a positive response from media.  Trailer and songs of this movie has shown in this event with anchoring of beautiful duo Vaibbhav Tattvavadi and Prarthana Behre.

Romantic, Comedy and Action Genre movie Mr. & Mrs. Sadachari is going to release on 19th Feb on the occasion of Shivjayanti. Best artist has worked on this movie. Mahesh Salgaonkar has done art direction & Cinematography done by Balaji Rangha. Choreographed by F.A.Khan & Subhash Nakashe and Screenplay & Dialogue written by Pravin Vitthal Tarde. This movie will be full package of entertainment.