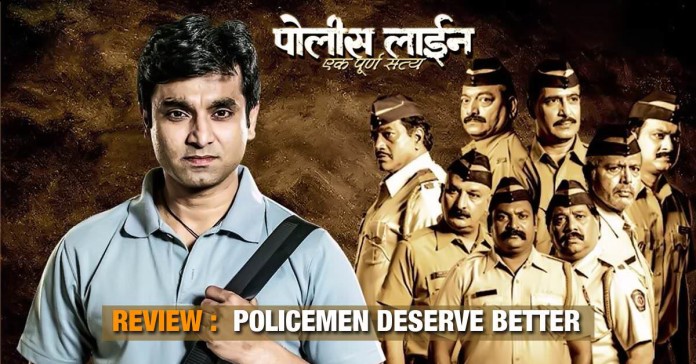 The police are undoubtedly one of the most overworked public servants in the state. They do not have any fixed duty hours; they are underpaid; and the housing colonies in which they live are crumbling structures. Police Line (a term used for colonies that house police) directed by Raju Parsekar attempts throws some light on the issues faced by the constables of the police. The screenplay here just peeks into the life of a number of character living in a housing colony of the police and tries to portray all their trials and tribulations. It lacks any sort of a plot. Though a lack of plot isn’t necessarily a recipe for disaster, but the characters here are poorly sketched and a little too many for our liking. Throughout the whole first half we are just introduced to these characters and almost nothing significant of any sort happens in the film. The first half is a serious test of our patience. The proceedings are so drab that I was finding difficult to not doze off. The treatment is very marathi tv like, full of melodrama and very poor acting.

There isn’t exactly a lead character here, but Bala played by Santosh Juvekar has been given the most screen time. He is the son of a retired police constable who is an upright gentleman, proud of the honesty with which he has performed his duty of a policeman. His married elder son, who has also joined the police, doesn’t believe in his father’s ideals and blames them for his family’s misery. Bala is a studious young man who plans to become a software engineer.

There are a number of other such families living in the same housing colony that the film sheds light on, but not even a single one of their stories holds our attention. The filmmaking is very outdated and bland. The setting is based in the 90s for the most part and it also feels that the film too was made in the 90s. There are numerous cringe-worthy scenes that had me squirming in my seat. Another aspect that works completely against the film is the preachy tone. Right from the voice over in the beginning the preaching begins and doesn’t end till the end credits stop rolling. Some characters just go on and on about the miseries of a police constable.

In a well-intentioned film like Police Line, I always make that extra effort to find something positive. But, unfortunately, apart from the noble intentions I couldn’t find anything even remotely worthy of any praise. The policemen, much like the policies of the government, have here been given a raw deal; they deserved hell of a lot better.

A well-intentioned film, but drab and preachy.