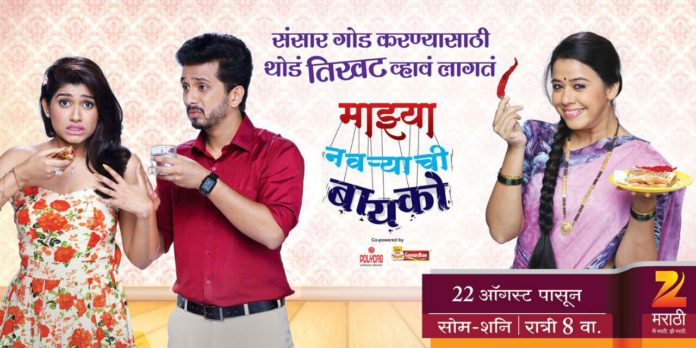 It is said that sharing of joys and sorrows is essential for any romantic relationship. It certainly makes the bond stronger in case of a marital relationship. But if a third party threatens to come between a husband and a wife, this bond has to be tied tighter. And for the bond to be tied tighter, sometimes it becomes necessary to shed your kindly self and become stern. A new serial titled Majhya Navryachi Bayko based on this theme is coming soon on Zee Marathi.

If a female intruder threatens to disrupt the sacred bond of marriage between a couple, shall the wife push her away or shall she make some space for her in the relationship? Majhya Navrachi Bayko will be seen exploring this plot. Abhijit Khandkekar, Anita Date and Rasika Dhabadgavkar will be seen in titular roles in the serial that will be telecast on Zee Marathi from 22nd August at 8:00pm.

It is a story about the married couple Radhika and Gurunath. The two have been college sweethearts and have migrated to Mumbai from Nagpur. Guru is highly focused on his professional growth, while Radhika is a dutiful housewife. Post migration they had a humble beginning in Mumbai, but now Guru’s business has expanded enough to call him a successful entrepreneur. Now they live in a swanky apartment and also have the luxury of having domestic helps for various chores. The entrepreneurial success has changed Guru as a person, but Radhika is the same devoted housewife. She doesn’t believe in changing herself only because of the newfound wealth. Her love for her husband and their boy Atharva knows no bounds. The simple, well-mannered nature of hers has won the hearts of not only her close ones but also the entire colony in which she lives.

But the now changed Guru has started finding his wife uninteresting. He is of the belief that there is nothing wrong in changing oneself if the circumstances become rosier.A female colleague named Shanaya has caught his fancy. A career focused woman, Shanaya has the knack of getting things done through people. She knows how to use people for her own gains. She is similarly using Guru and has turned the straight forward young man into a nasty ‘Gary’.

Radhika is unaware of this relationship between the two as she is naïve enough to believe that her husband is faithful to her. She is of the strong belief that he is completely incapable of cheating on her. The revelation comes as a shock to her. But rather than getting distraught she resolves to lay bare the true side of Shanaya to her husband and win him back. Will she find success in this resolve of hers? What plans does Radhika chalk out? Who all helps her in this endeavor?  ‘Majhya Navryachi bayko’ is going to be a fun tale about all this and much more.

Abhijit Khandkekar will be playing Gurunath, while Anita Date will be seen in the role of his wife Radhika. Rasika Dhabadgavkar will be portraying the role of Shanaya. Arun Nalawade, Suhita Thatte and Shweta Mehandale will also be seen in prominent roles. The screenplay has been written by Rohini Ninave and Abhijit Guru while the director is Kedar Vaidya. Tejendra Neswankar of Trumpcard Productions has produced this serial.

‘Majhya Navryachi Baayko’ will be telecast on Zee Marathi at 8pm from 22nd August.