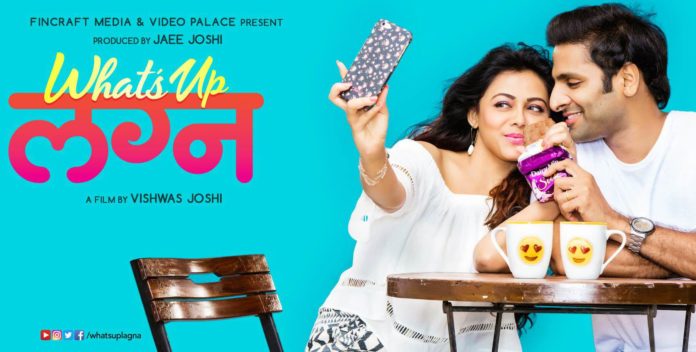 The promos & trailers of ‘What’s Up Lagna’ suggested something drastically different from the actual film. A trailer doesn’t need to summarize the whole film & imbibe the main conflict of the film, but it needs to give a fair idea about the genre of the film. ‘What’s Up Lagna’ is anything but a ‘rom com’!

One of the biggest problems with ‘What’s Up Lagna’ is unfortunately ‘product placement’ something we usually ignore these days, in this case I couldn’t! There’s a particular matrimonial site that had no reason whatsoever to exist in this film because the lead characters have already met physically! The film shamelessly lingers on it’s name trying to infuse it within the narrative, eventually failing at it miserably. I couldn’t keep a count but roughly there are 7-8 different products (or services) that the film has shamelessly endorsed.

An IT Engineer (Vaibhav Tatwawadi) & an actress (Prathana Behere) slowly & steadily fall for each other & without much conflict get married. The film does all this till the first half & we are yet in search of a conflict. We are aware that the film wants us to believe that it’s the opposing natures of the characters that would bring the conflict, but the actual conflict has very little to do with their opposing natures! The first half also tries to create a modern day family drama among the families of Vaibhav’s & Prarthana’s characters which appears a montage of scenes we have seen in different recent films from ‘Coffee Ani Barach Kahi’ to ‘Muramba’. The opening credits sequence introduced us to Vaibhav’s & Prarthana’s characters by letting us into their morning routines. Sadly the interest that is created by this sequence is never recreated again in the film.

At many instances the film keeps telling us how the two of them are a perfect mismatch. But never considers a perspective that inherent personalities of people are not really connected with the work they do. The film stereotypes how an ‘artist’ would be in his/her personal life & will only change provided something drastic, a tragedy has happened in his/her life. It also feels that ‘creativity’ is restricted to certain ‘types’ of works alone! As said earlier these differences have so little to do in the actual conflict of the film which arrives much late in the second half!

The modern relationships today don’t have the luxury of ‘time’! Jobs are no longer conveniently 9-5, one needs to choose between time & career (or money). It’s difficult to have your cake & eat it too. This was truly a relatable subject one that can resonate with all kinds of audiences today. In one of the dialogues by a supporting character the life of this couple is explained as independent from each other, they are living together in a house but are living their lives alone on their selves. However after introducing the subject the film doesn’t really understand how to plan it’s journey. The resolution is rather oversimplified & makes the whole exercise unimportant.

Vaibhav Tatwawadi a usually magnetic actor gives a blandly understated performance here. Prarthana Behere displays her limitations openly while playing an animated ‘messy’ modern day girl. The supporting cast too doesn’t shine anywhere in the film. The only strength the film has is a subject that is so relatable yet unheard of in our films. But a known fact is that just an idea is never enough, a good writer needs to execute it well first on the paper & then the director has to keep the purity of the execution intact. The film failed in both departments.

If You’re expecting a rom com entertainer here, you need to know that ‘What’s Up Lagna’ isn’t one. And it’s a 2 & half hour long film that couldn’t make the most of it’s timely subject that could have resonated with today’s film watchers.