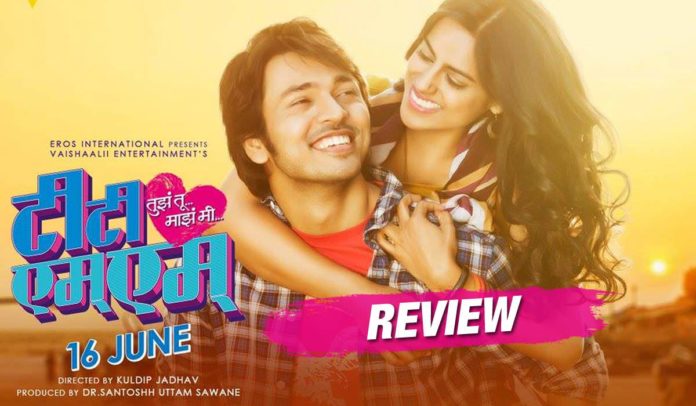 ‘TTMM – Tujha Tu Majha Mi’ is a film that tells nothing new, & also the way in which it tells has nothing new about it. From ‘Chori Chori’ (Raj Kapoor – Nargis), ‘Dil Hai Ke Manta Nahi’ (Aamir Khan – Pooja Bhatt) to even ‘Jab We Met’ (Shahid – Kareena) this formula of ‘opposites attract’ has been used repeatedly. However, as most of the times the problem is not the formula but the elements it uses to surround it. Countless little scenes in this film become empty & plain boring because the emotional context that is supposed to drive the audiences towards the film fails miserably.

The boy (Lalit Prabhakar) is a passionate traveler & he feels that marriage will put a halt to his freedom & his dream to travel the world will remain unfulfilled. The girl (Neha Mahajan) at a different place, wishes to marry the boy of her dreams (how typically 90s) & is not ready to settle with a slightly bald guy. It’s ironic how the girl never even once thinks about her professional life! The film romantically keeps its hero in today’s times & the girl in the age-old era of 80s or 90s. So they both meet on a bus by co-incidence & start fighting from the word ‘go’. You must have predicted why & how these two strangers meet on a bus. And then start their meaningless journey of self-exploration.

Right now we can give away the logical errors till this point, but then the major conflict of the film too is a major logical flaw! I am not revealing anything but we are all familiar about Goa & how it’s one of the safest & the most popular tourist destinations of India & the tourists there enjoy enough freedom! But just how the film deals with its heroine, it deals quite similarly with Goa, & honestly that hurts!

Though most of the cast that includes Lalit, Neha, Savita Prabhune, Vidyadhar Joshi, Satish Pulekar, Bharat Ganeshpure, & the unfortunately type casted kid Pushkar Lonarkar; have done their bit, but none of them manage to interest us, except Sagar Karande (with some of his usual antics) & Seema Deshmukh as the mother of the heroine who gets a few effective scenes. The film has desperately tried to portray today’s father through Satish Pulekar (heroine’s father) & Vidyadhar Joshi (hero’s father) by giving them exclusive scenes where they try to put forth ‘father styled philosophy’ in front of their ‘confused’ kids. But unfortunately none of these scenes work, mainly because we aren’t connected with the confusion that’s happening in our hero-heroine’s lives.

Technically the film is nothing extraordinary but definitely not a disaster. The basic idea (though not completely original) did have potential, & could have made the film a decent entertainer provided the writer-director had worked on the logic part of the film. ‘TTMM’ is a film that doesn’t really get on your nerves or bombards you with loud background score & theatrical acting (something that is being a bit common in Marathi right now), instead it bores you with factually normal but shots (& scenes) that appear unnecessarily long. Dialogues that for no particular reasons have pauses, and all of these aspects (& more) disinterest you throughout the runtime.

One thing that needs to be noticed, that a film (especially the first film) reflects its director’s passions & his/her take on life in general. The director of this film Kuldeep Jadhav might have failed in the craft of filmmaking in his debut but if he tries to learn it more (& of course through experience) he might give us interesting films about passionate travellers in the future.

You have to be a die-hard fan of Lalit Prabhakar or Neha Mahajan to able to enjoy this film or else ‘TTMM’ is easily avoidable.