Ever since Ganesh Acharya’s ‘Swami Tinhi Jagacha..Bhikari’ movie has been announced every one has been curious about the film. The mahurut of this film commenced in the presence of India’s greatest Superstar Amitabh Bachchan & the youth icon Tiger Shroff. Now another Bollywood star Ranveer Singh has wished Ganesh Acharya & the film all the best through his official twitter handle.

The first poster of ‘Bhikari’ was revealed by Ranveer Singh on twitter! This poster definitely increases the curiosity about the film in multiples. A man wearing a nice formal suit is sleeping with an umbrella on his face. And aside him is an empty bowl that a beggar uses! This man is supposedly Marathi Superstar Swwapnil Joshi who plays the lead role in the film. This role will definitely be one of Swwapnil’s most challenging & special performances in his whole career, as the poster & the theme of the film promises. 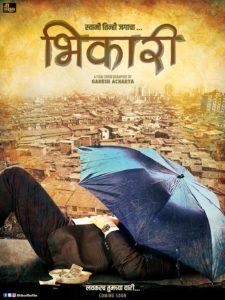 Popular Bollywood choreographer & filmmaker Ganesh Acharya is making his grand entry into Marathi as a director with ‘Bhikari’. The film’s story, screenplay as well as the songs are written by Guru Thakur who will also be acting in the film. One of the major attractions of ‘Bhikari’ is the ‘Gajanana’ song in which around 1000 artists will be performing! Hence it has already been termed as a ‘Super Song’! ‘Bhikari’ is definitely one of the highly awaited, big budget entertainers in Marathi of 2017.