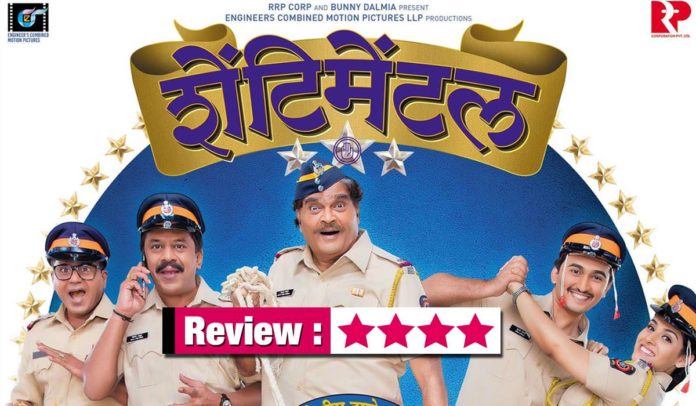 Defining commercial entertainment isn’t easy. There shouldn’t be a specific ‘formula’ to it. But if we observe the films that are highly successful in India, have something in common. It’s the emotional connect! It need not be an out & out tragedy where the audiences keep shedding tears, but few basic ‘touchy’ instances that do the trick, provided the other aspects are taken care of! In case of Sameer Patil’s ‘Shentimental’ the other aspects include unforced humour, & a new approach towards the world of police! 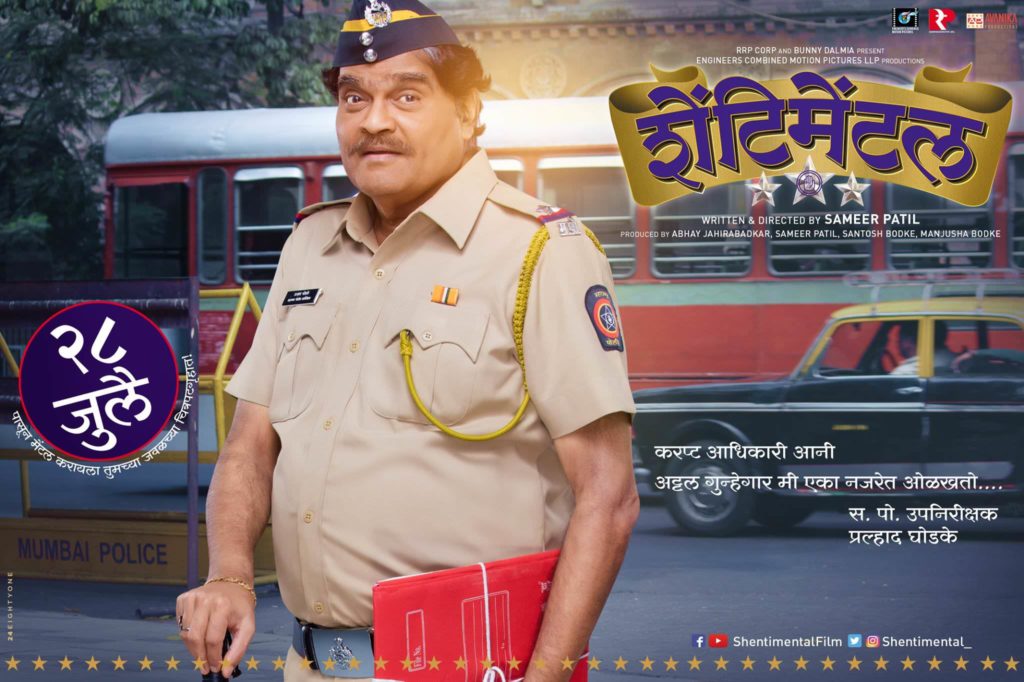 Sameer Patil succeeds at the most basic stage of this film, the writing! A smoothly crafted three act structure, where the actual aim was not to give us a crime investigation film, but to investigate the human side of both the police & the criminal. Just as the title suggests, this film is sentimental about both parties. Ashok Saraf’s ‘Prahladrao’ a constable, is definitely the heart of the story, but all other characters are equally important. Upendra Limaye’s ‘Dilip Thakur’, Vikas Patil’s MPSC pass out ‘Subhash Jadhav’ & newcomer Suyog Gorhye’s ‘Manoj Pandey’ (the thief) all of them & ‘Prahladrao’ are equally important in the chain of events that take place. In addition to that Raghubir Yadav makes a delightful cameo as a quintessential ‘Bihari Bad***’.

The first act happens in Mumbai, which introduces us to these police men & women working at Andheri’s D.N. Nagar Police station. There are many insightful ‘inner police jokes’ that are a treat! They should be discovered in the theatre itself! ‘Shentimental’ borrows a bit from ‘Dabbang’ for sure, in terms of the overall approach to its characters. But ‘Shentimental’ doesn’t have a hero, & that very quickly establishes an altogether different path for the film. The second act is the most fun part where we are on a railway journey from Mumbai to Bihar! But throughout the two acts ‘Shentimental’ never loses the emotional grip on the audiences. 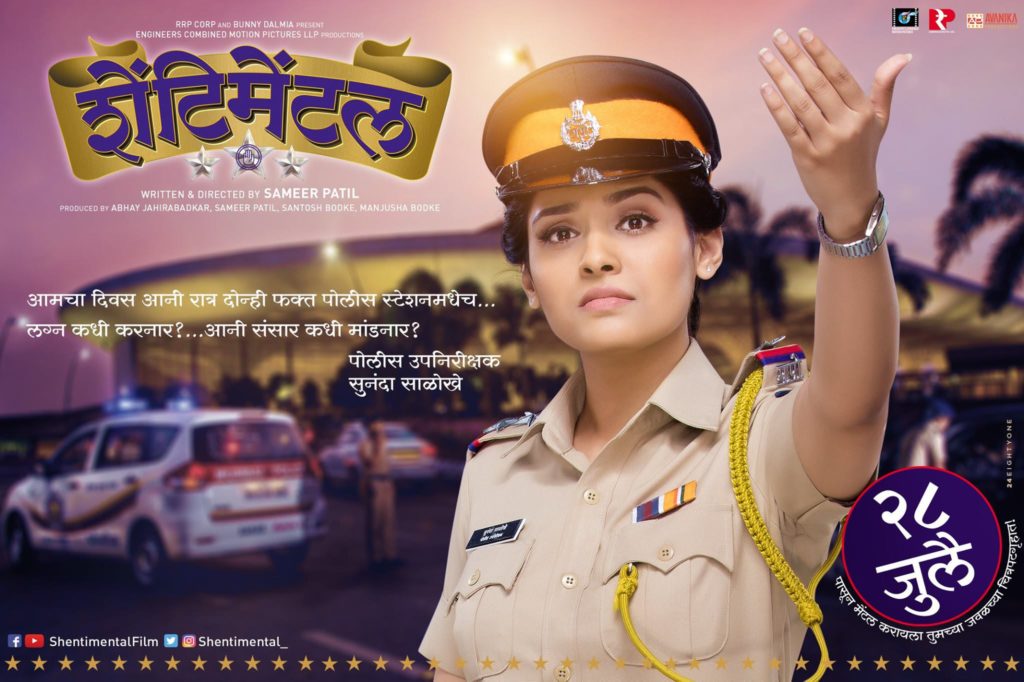 The final act is a sheer roller coaster ride! Sameer Patil manages to actually transport us to ‘Bihar’! Only the language of this film remains ‘Marathi’ rest of it makes us forget that we are actually watching a Marathi film. We wish the third act was longer, because somewhere the end is a bit abrupt (though it doesn’t spoil our overall experience in any way). Almost every film that aspires for commercial success in India tries to mix & match humour with emotional drama. But very few of them actually manage to figure out the right blend! That too without interrupting the natural rhythm of the story! ‘Shentimental’ is one of those few Indian films that give a ‘complete’ experience to our audiences.

Ashok Saraf’s comeback has been hugely awaited by his countless fans & all of them will have a ball watching the man still dictate the big screen with the same finesse & control! Yes the energy’s not the same, but it’s understandable & also suits a man who is only two years away from his retirement. The back story of Prahladrao’s character is actually relatable to any working common man who has grown up sons or daughters & is nearing his retirement & not just the police. 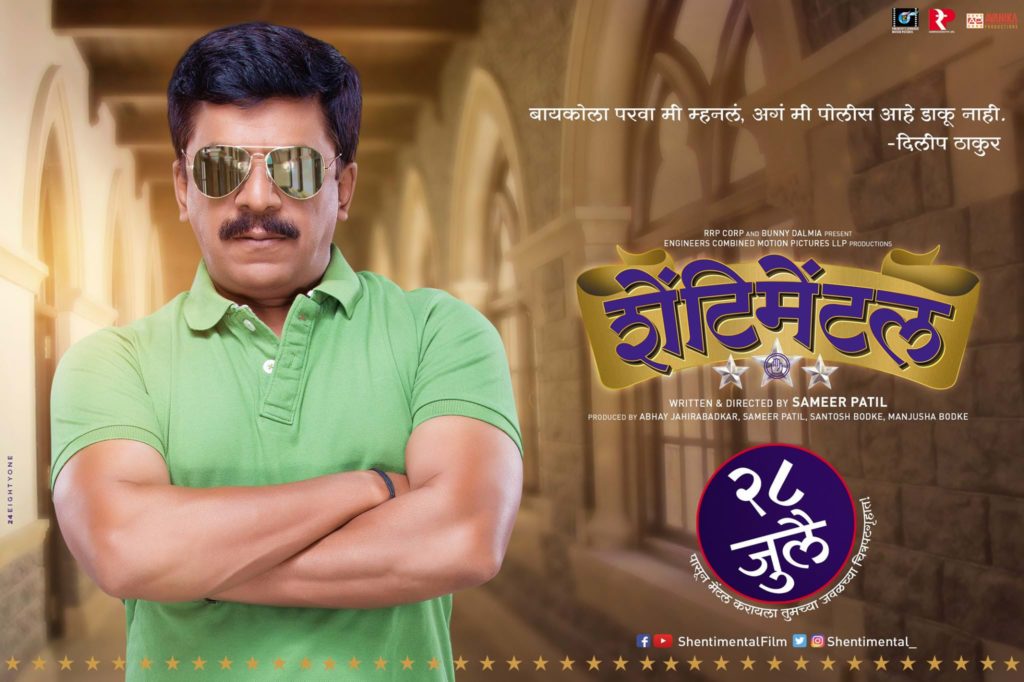 There’s a little love story established in the first act between Vikas Patil’s character & Pallavi Patil’s character, that needs a mention. Mainly because it can work as a perfect example of how to treat a sub-track in a story! It’s smartly been connected with the extended point ‘Shentimental’ makes about the condition of police & their hectic life. Even their song ‘Ithech Mandu’ so beautifully represents the same. 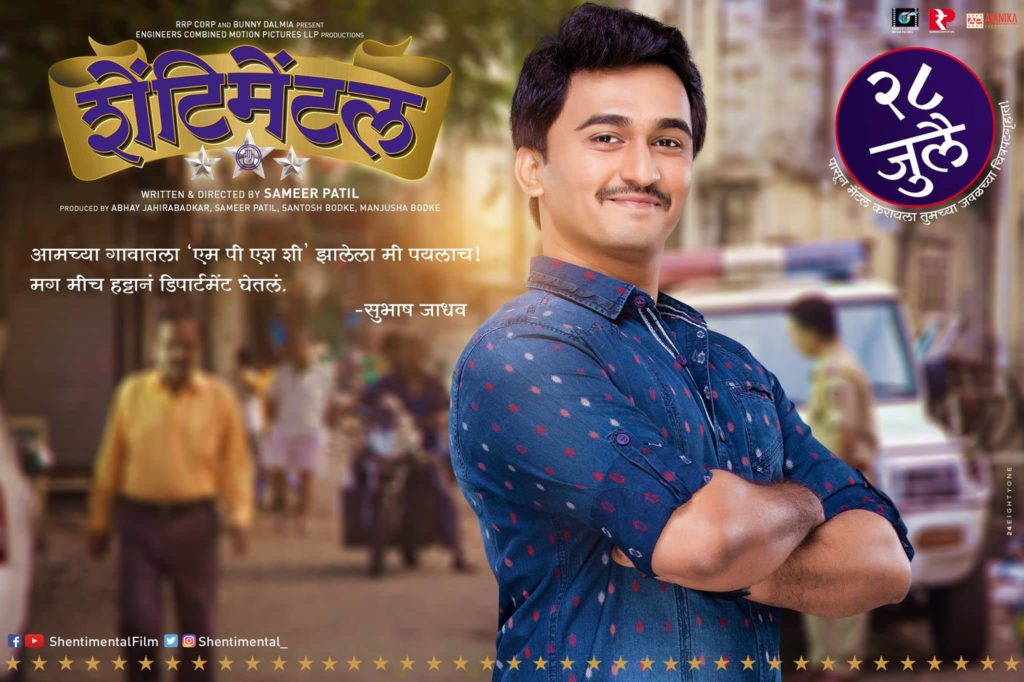 Sameer Patil’s ‘Poshter Boyz’ & ‘Poshter Girl’ were good, but in parts! Here he has managed to give Marathi cinema an extremely essential dose of guilt free entertainment that also has few important things to say.

‘Shentimental’ is a film that is technically well crafted, emotionally strong & refreshingly funny throughout! Not to forget it makes an essential social commentary about the regional disputes between Bihar & Maharashtra! What more can a Marathi movie fan desire!