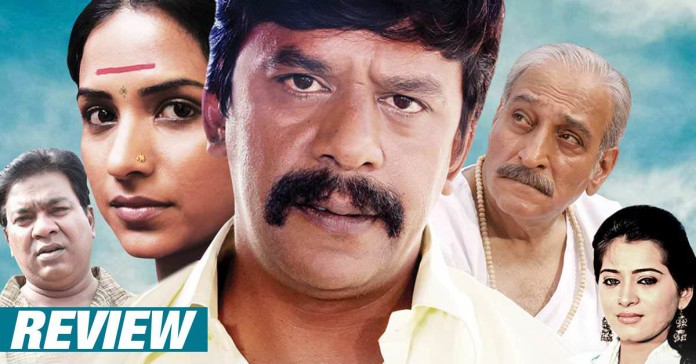 Sarpanch Bhagirath is one of those films that despite a having a good enough story suffers from a weak screenplay and mediocre direction.

Bhagirath (Upendra Limaye) has been elected as the sarpanch of Lokapur. Sadakaka Deshmukh has been the sarpanch of the village for three long decades. He finally has to relinquish his position as the office of the sarpanch came under reservation. Shrewd politician that he is, Sadakaka manages to get his man – Bhagirath – onto the office of Sarpanch. The new sarpanch is a straight-forward man with modest means. He is slightly ignorant in the matters of politics, but is grateful of getting an opportunity to make a difference to his society. Within no time he gets a good dose of how dirty politics can become. 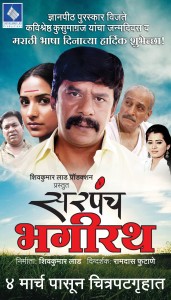 Rahi – Bhagirath’s wife – is a mother of two girls. She harbors a wish of a third child, preferably a boy. Only after she conceives and is well into the 4th month of her pregnancy, Bhagirath comes to know that a third child will force him to surrender his position as the sarpanch. Rahi is unwilling, but Sadakaka is relentless in putting pressure on Bhagirath to abort the child.

Sarpanch Bhagirath then goes on to portray the turmoil in the mind of Bhagirath who is torn between holding on to the office of the Sarpanch and facing his wife who will naturally be very upset with the suggestion of aborting the child. While doing so, the film also makes a point to comment on the various social issues such as the caste discrimination, religious strife, corruption, etc. But, strangely, domestic violence is not considered a bad enough vice as Bhagirath, who has been shown to be a fairly liberal fellow, is remorseless about raising a hand on his pregnant wife.

The story of the film definitely had something in it to hold your attention. However, the screenplay here is rather weak with none of the characters other than Bhagirath getting fully developed. The mediocre direction also doesn’t help. The film has a dated look to it, and feels as if it has been shot in the 90s.

The director has managed to cast a lot of quality actors and it is their performance that makes the film watchable. Mohan Agashe as the shrewd veteran politician is spot on. Limaye, too, is convincing in his role of the young farmer pushed into the nasty world of politics. However, none of the performances are enough to save the film from becoming a bore.

A potentially interesting story marred by a shoddy screenplay and dated direction.