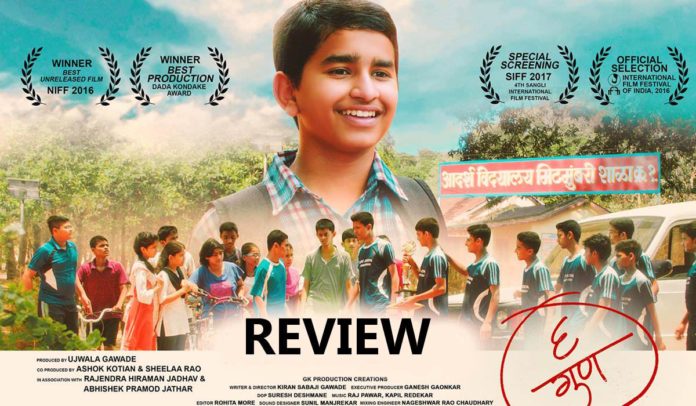 The one thing that filmmakers who are trying to deliver a clear message should do is be sure about what exactly is the message. ‘Saha Gun’ fails at this basic stage. However the storyline of the film is not all nonsense. If written by a skilled screenwriter & equally sound director ‘Saha Gun’ could have at least scored average marks.

The film is set in a small village in Konkan& deals with lives of a few 8th std. kids studying in ‘AdarshVidyalaya’. I am reluctant to call the character of VidyaSarvode (ArchitDeodhar) as the protagonist of this story, because the film ignores his perspective almost completely. Vidya is under the dictatorial rule of his mother (sadly, AmrutaSubhash) who is ferociously obsessed with her son’s first rank in studies. Yes the film tries to justify this obsession later but it’s completely powerless. Vidya considers every other child in the class as beings belonging to inferior species. And along with his mother quite confidently believes that he’s the ‘Rajhans’, so that obviously makes the entire class hate him except one girl (for no apparent reason). Then enters RajuPanse; the new kid in town who quite effortlessly becomes the class favorite. Raju is marvel of modern science! The kid’s perfect in every possible way!

So the film quite mercilessly becomes all about winning & defeating your opponent, whether it’s studies or a ‘Kabaddi competition’! Never do we see a perspective that reminds us about the ‘fun’ part in studies or sports. Actually the character of the father (a scientist who once also competed in ‘Kabbadi’ & won some prestigious award – again the ‘perfect dad’) makes a few half-hearted attempts to make his child enjoy his life, but then the last say again goes to the win-obsessed mother.

The film takes the primitive route that no matter what your parents love you & all they do is for the good. If you remember that in ‘Dangal’ the  father asks for one single year of training the daughters & promises his wife that once they don’t feel like continuing it, they can leave it. This little addition makes a whole lot of difference in the moral department.

Never do we understand her side or feel connected with the mother. Though AmrutaSubhash plays the ‘hitler’ mom with decent effect, but we can’t stop comparing her previous films to this messed up dosage of ‘fighting spirit’.

Barring a few scenes the film also fails in utilizing the beautiful locales of the region. The ‘n’ number of child artists are cardboard cutouts including ‘RajuPanse’ who has an important role in the story. Though ArchitDeodhar has been around now post ‘Killa’, he manages to display no sense of maturity as an actor. The most unintentionally amusing character is of a kid named ‘Babban’ who is the son of local politician who is again almost ‘perfect’. Now this seems to be an agenda of showing powerful families of villages as rightful, noble & in-born with great leadership skills. The of course there’s a fat kid & thin boy who are prescribed for a few laughs (which they never deliver).

There’s one accepts that one can’t make out even after watching the whole film & that is the period in which it’s set, however whichever period it’s supposably set in quite maniacally represents our education system as equally (as the mother) obsessed about the ‘first ranker’ in class! Where we that bad really?

‘Saha Gun’ is a film that a parent or a child should think twice about, (or maybe thrice) before watching it together.