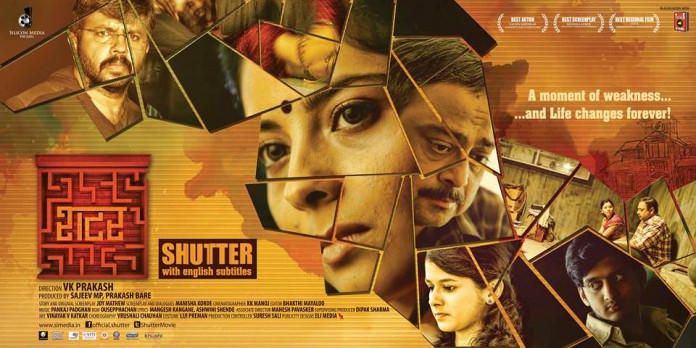 The basic aim of a thriller or a dramatic thriller is to keep the audience glued and guessing. If this aim is achieved, the film manages to override some fallacies, if any. As the same happens in the case of indebutant director V K Prakash’s Shutter, the film becomes worth watching.

Shutter is the official Marathi remake of director Joy Mathew’s Malayalam movie of the same name. It revolves around Jitu aka Jitya (Sachin Khedekar), who works on a ship. He also gives properties on lease. He has returned to his hometown Mumbai during a break.He is a hot-headed middle-aged man, who is constantly at loggerheads with his wife. 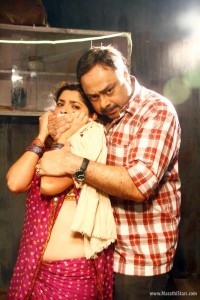 His patriarchal mindset also makes him see red whenever his daughter (Kaumudi Walokar) interacts with her male friends. But he has a good, down-to-earth rapport with the young rickshaw driver Ekya (Amey Wagh). Jitu also has a group of friends, with whom he regularly holds drinking sessions in one of his empty properties.

After one such night out, some unusual events get him locked inside the property with a prostitute (Sonalee Kulkarni). On the other hand, a Kannada filmmaker (Prakash Bare), who is trying to make his debut in Marathi cinema, misplaces his script just before a narration session. Where will the tale lead?

It takes time for the main turn in the tale to arrive. But a gripping screenplay and intense presentation keeps boredom completely at bay. The grip is fairly maintained for the most of the film’s duration, which becomes its biggest plus point. Some thriller elements, especially during the interval point, are smartly included. The manner of narrating also takes care of few portions in the second half when the proceedings become slow.

Shutter, however, isn’t all about a dramatic thriller of two people trapped. There is an undercurrent of a social theme, which comes into play more so towards the end. It is not possible to reveal anything more to avoid spoilers.

But some issues stop the film from being more impressive. There are some constant questionable moments in terms of logic and behavior of few characters. The track featuring Ekya’s grandmother also serves no purpose.

But the biggest issue is the situation of the Kannada filmmaker. His friend is not able to send a soft copy of his script as he is stranded at a place with no internet. So why can’t the filmmaker get the soft copy from his own email? He surely must have mailed it to someone. Also, he could have asked someone else to mail. 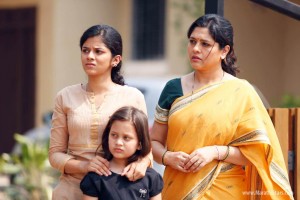 K K Manoj’s camerawork goes with the intense theme. His work stands out in various sequences, especially the one where the camera is zoomed on the lock of the shutter and an auto rickshaw moving in the background. The editing is fine too while the background score generates the desired effect.

As expected from a veteran artist, Sachin Khedekar perfectly gets into the mode of the character. He switches over from being ruthless to helpless with ease. Sonalee Kulkarni also shows she is a fine actor. She also looks ravishing, which was the need here. Amey Wagh once again impresses with his talent. Prakash Bare, who is also the co-producer, provides an earnest act. Kaumudi Walokar, as Jitu’s daughter, is likable.

Shutter is worth watching if you prefer new-age thrillers. The film has a decent chance of doing well at the box office, more so in the urban areas.