In Akolner, a small village in the interiors of Maharashtra, lives an adolescent Jambawant Kachru Mane aka Jabya (Somnath Avghade), who constantly faces wrath of his father (Kishore Kadam) for his mischievous ways.

Jabya secretly loves Shalu (Rajshree Kharat) but she is hardly aware about his existence. But the bigger hurdle for Jabya is that Shalu is from a well-to-do higher caste while he is from the lowest one. Hence, his family is forced to carry out tasks that are considered dirty, like killing wild pigs aka Fandry. How will Jabya overpower this social barrier?

From the promotional material, Nagraj Manjule’s directorial debut Fandry appeared similar to Shala and Timepass due to the adolescent love angle. Although that is very much its subject, it is far different from these two films since it mainly deals with the issue of caste discrimination. But instead of being a direct attack on casteism, it follows an indirect hard-hitting route full of artistic brilliance. Such a description, however, also means that the film suits more for the lovers of art-house or festival cinema.
As expected from a contemporary village flick, Fandry slowly but steadily gets the audience involved into the world of Jabya through a series of appealing moments born out of his daily routine. The protagonist’s restrained yet strong desires mostly portrayed through his innocent conversations with his best friend Piraji (Suraj Pawar) instantly make you sympathetic towards him. 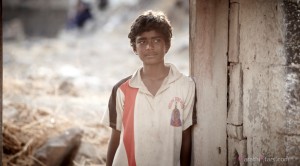 It is remarkable how in his very first film Manjule has presented the issue of casteism and exploitation of the supposed lower castes by simply using the visual medium. This ensures you are glued to the screen despite the film not having a conventional storyline. Along with the fixing of Jabya’s sister’s wedding, jatra scene and the long climax, the very last second deserves special mention for its symbolism and the thrilling 3D-like effect it generates (watch the film to know more about this). It also brings back memories of Shyam Benagal’s Ankur.

The only negative aspect is that such an arty film should have been told in a lesser duration. They could have shortened few scenes. And needless to say, the film won’t appeal to those who prefer conventional entertainment.

Vikram Amlady’s beautifully creative camerawork makes the film what it is. Aloknanda Dasgupta’s background score brilliantly complements various situations. Using loud drum sounds during thrilling moments works very well. There are no songs but the one recited by the character of Piraji a couple of times is super pleasing.

Manjule has churned out brilliant performances from his cast although most of them are non-actors. Somnath Avghade deserves immense praise for his excellent portrayal of Jabya in his first film. At times he had the difficult task of portraying emotions through expressions but he does that exceedingly well. The reliable Kishore Kadam scores brownie points this time too with a thoroughly dedicated act.

Suraj Pawar too is excellent as Piraji. Manjule himself plays the role of Charkhya perfectly. It is surprising to see Rajeshwari Kharat playing just a cameo and getting hardly any chance to speak. To be fair to her, she does well of whatever opportunity she gets. The film is also blessed with a number of good supporting acts.

Fandry is an artistically crafted hard-hitting drama that deserves a watch if you prefer unconventional, realistic cinema. The film’s triumph at various international film festivals has ensured a positive word-of-mouth, which is reflected in the good opening it has received. If the word continues to spread, it will be a winner at the box office.