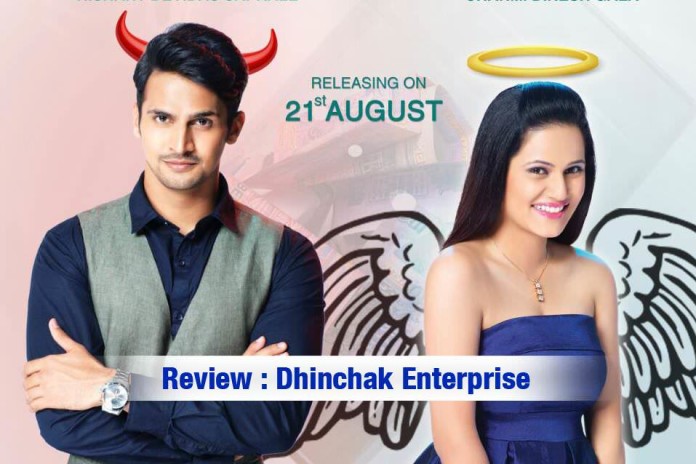 Marathi cinema is going through an impressive period since last five years or so. Some bold, contemporary subjects are been tried and they are well-received too, even by non-Marathi audience. This year has also seen its share of cinematic gems.

Unfortunately, there has also been a regular dose of trashy Marathi films in 2015. Out of these, some even make you wonder as to how it attracted financers in the first place. Director Nishant Devidas Sapkale’s Dhinchak Enterprise is yet another film that adds to this dangerous trend.

The film is about Vishal Patil (Bhushan Pradhan), who is a salesman in a firm producing slimming tablets. His career gets a boost after he gets the Employee of the Month Award. When a fresh MBA graduate Meera (Manava Naik) joins his team, he instantly falls for her. However, Vishal’s perfect world starts crumbling suddenly. This compels him to start his own firm named Dhinchak Enterprise.

The only positive point one can find in Dhinchak Enterprise is few funny sequences in the first half. Despite the not-so-intelligent content, this part keeps you mildly entertained and generates some curiosity for the second half. But everything goes haywire post-interval.

The title indicates that the story is about the rise of a company named Dhinchak Enterprise. But the makers have given absolutely no footage to its formation and success. This is not a minor issue because this forms the crux of the main plot. However, the remaining part makes this error appear minor as you are dished out a series of silly incidents until you no longer care for the final outcome.

A (so-called) major twist in the second half is perceived by one of the main characters as an immoral and criminal activity. However, the character himself has made a fortune by unethical and illegal means. So, what right does he have to point fingers at others? More importantly, why should the audience feel for such a character?

Needless to say, the film provides a number of unintentionally hilarious moments. The biggest one is the reaction of few news reporters during a press conference.

The love track becomes a hindrance later on. It also brings with it few unwanted songs. There is also a disco track about tequila featuring the heads of a social organization. It goes against the characters and the film. The peppy and quirky background score triggers humor, mostly in the first half. The camerawork is fine.

Bhushan Pradhan displays his talent and charm yet again. However, he should seriously ponder over his choice of films. Manava Naik isn’t bad. Khursheed Lawyer, making his Marathi film debut, is irritating because of his forced bad Marathi pronunciation. His character’s over-Gujarati-ness at the start is embarrassing. But he shouldn’t be blamed as it is obvious that he was suggested to act this way.

There is nothing dhinchak in Dhinchak Enterprise. The film suffers from a poor content. It will go unnoticed at the box office.