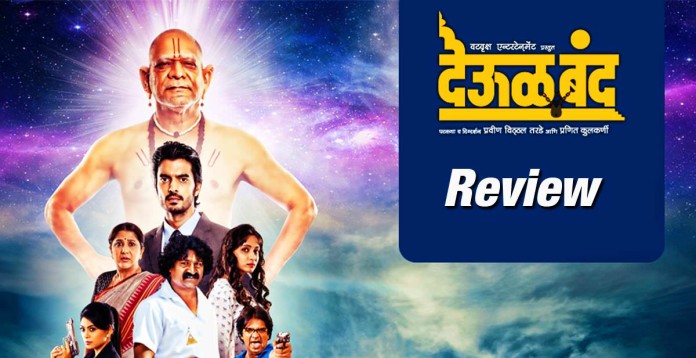 Turning an atheist into a theist requires conviction, more than anything else. Unfortunately, this is not the only issue with Deool Banda. In trying to be over-ambitiously religious and entertaining at the same time, the film ends up making fun of itself and that too through a duration of 3 hours and 5 minutes.

It revolves around the scientist Dr Raghav Shastri (Gashmeer Mahajani), who is an NRI living in the US. He visits India, with his wife and daughter, to add value to ISRO’s (Indian Space Research Organization) security systems that track terror activities. Raghav is a strict atheist, who is against Swami Samartha due to personal reasons.

Due to security reasons, he is given accommodation in a normal housing society. He is annoyed to know that the society has a Swami Samartha temple, which is thronged by residents throughout the day. Simultaneously, Raghav is having a tough time with ISRO members, whom he considers good-for-nothing.

Frankly speaking, Deool Banda has nothing working for itself. It looks as if the makers were so eager to spread the worship of Swami Samartha that they completely forgot about a proper storyline and a convincing narration. Merely speaking great things about Swami Samartha and playing his songs isn’t enough.

The film doesn’t stop at that. Swami Samartha is also an important character. So, one would expect him to spread his message and wisdom. But almost all the time, he just makes fun of the protagonist through one-liners and PJs. However, in a way, this is the only aspect that makes the film somewhat watchable as it produces both intentional and unintentional laughter.

There is more unintentional laughter in store through the following points:-

Many more points can be added but they aren’t to avoid spoilers. A couple of religious songs do go well with the subject. There is nothing noteworthy in the camerawork. The background score is too loud, especially during an important scene where you are forced to cover your ears.

The biggest plus point is Gashmeer Mahajani. He succeeds in proving that apart from good looks, more importantly, he also possesses some serious acting talent. Mohan Joshi provides entertainment as Swami Samartha. Girija Joshi is average in the role of a routine wife of an ambitious husband. Nivedita Saraf appears over-religious. But not as much as Pravin Tarde, who turns out to be a fanatic. Mohan Agashe is decent.

Deool Band tries too hard to put across a message without any sort of conviction. It might attract a decent crowd due to the subject of Swami Samartha. But there isn’t much hope at the box office.