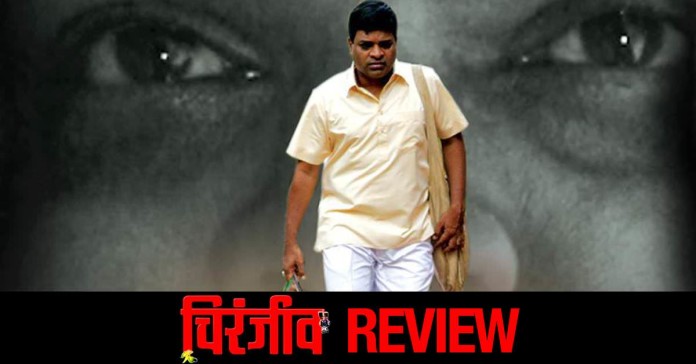 Chiranjiv starts with a disclaimer that goes something on the lines of ‘ This film does not support any superstitions, but is raising a case against it.’ Now, just the fact that this disclaimer has been added is an ominous sign that it has failed to achieve what it had set out to.

The film is about a family in the Konkan region of Maharashtra, who have supposedly been cursed with at least one of the male members of every generation of their family losing their mind. The film begins with the youngest member of their family winning a Sahitya Akademi award for his book titled ‘Chiranjiv’. The film goes into a flashback which is also supposedly what the story of the novel is. 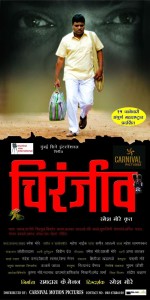 The plot which is based in the 1980s of rural Maharashtra also seems to belong to that rather forgettable era of puerile melodramas. In the film, we have Ganya Kaka (Ravi Kale) who has been chained and locked into the loft as the aforementioned curse has supposedly made him lose his mind. After he commits suicide, the family, which has blind faith in superstitions, is shown to be worried who the curse will pass on to. Within a day after Ganya Kaka’s death, his nephew, Keshav (Bharat Jadhav) wakes up startled from a nightmare. This episode makes the family fear that the curse has been passed on to Keshav. After consulting a fraud fortune teller, the family starts to believe in the curse and also the social circle in which Keshav hangs around. The film attempts to portray how a society that has blind faith in superstitions can make the sanest of mind insane.

The film then goes on to milk the melodrama in the plot. The second half shows the downward spiral of Keshav into insanity. The idea here was to show how a society steeped in superstitions and blind faith can turn a sane mane into an insane one. However, the scenes are so clichéd and the treatment so loud that you are left wondering what the makers of the film were exactly trying to do here. The staging of the scenes is quite poor and the amateurish acting by some of the supporting actors does not help either. The only opposition to the evil act shown in the film is by Keshav’s brother. But the character is so shoddily written that it irritatingly flip flops from supporting superstitions in one scene and opposing them in the next.

The director Ramesh More, who has previous made films like Amhi Ka Tisre and Champions, had a decent cast at his disposal with actors like Kishore Kadam, Bharat Jadhav and Alka Athalye. However, the bizarre plot, inferior screenplay and loud direction blunts any impact their performances could have made.

Chiranjiv is a film that belongs to the 1980s, much like the period it is based in. It is unbearably melodramatic with a plot that borders on being ridiculous. It totally fails to raise any sort of a case against blind faith in superstitions.