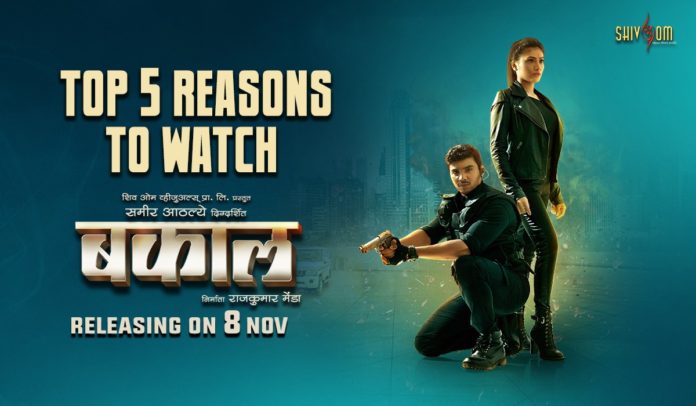 Produced by Rajkumar Menda and directed by veteran cinematographer turned director Sameer Athalye ‘Bakaal‘ is an upcoming action entertainer that is all set to hit theatres this Friday on 8th of November. Here are 5 reasons why it should not be missed!

Action films in Marathi are a rarity. So an opportunity to experience an well made action entertainer in theatres shouldn’t be missed by Marathi audiences! As such films are more effective on the big screen!

Marathi films are very well known for taking up social subjects but the social issue of drug abuse in youth hadn’t been taken in Marathi film before! ‘Bakaal’ is the first Marathi film about it and hence it has to be watched by one & all to understand the dangers of the drugs abuse and to understand why it’s eradication is necessary!

Along with the social issue’s importance ‘Bakaal’ is also filled with all aspects of entertainment from music, dance, romance, comedy, family drama to of course action & nationalism! Compared to some recent adult comedies in Marathi ‘Bakaal’ can be enjoyed by the entire family sitting together in theatres!

‘Bakaal’ is based on true incidents that happened in the 1980s around the Vidarbha region! Moreover the film also has the backdrop of Vidarbha’s culture and traditions! The song bout the ‘Marbat’ festival in Vidarbha is the first song in Marathi cinema about the festival!