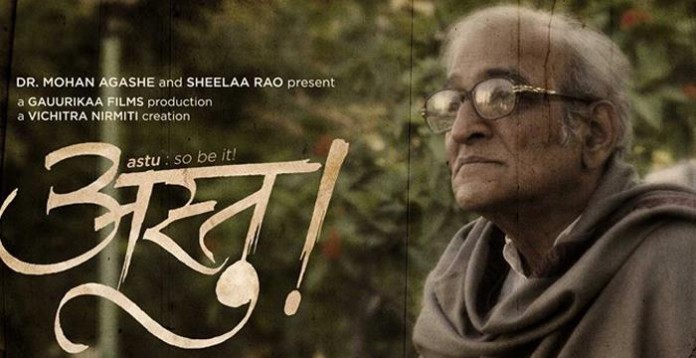 The film revolves around a retired college principal and widower Dr. Shastri aka Appa (Mohan Agashe). He is highly respected for his wisdom and deep knowledge about the Vedas. But lately he has also become known for being handicapped with Alzheimer’s disease, which makes him forget anything, including the names of his own family members.

Appa’s daughter (Iravati Harshe) is married to Dr. Madhav (Milind Soman). Once she takes Appa to his old house. On the way, she leaves him in a car for few minutes as she needs to visit a shop. But in that short duration, Appa goes missing.

There are innumerable films that speak a lot. But there are very few that say a lot of things without saying anything. Directors Sumitra Bhave and Sunil Sukhtankar’s Astu – So Be It is one of those rare films. On the surface, it appears as a lost-and-found saga but deep inside it brings to forth many layers that force you to think about it long after you leave the cinema hall.

Astu has Bhave and Sukhtankar’s stamp of uncompromising attitude all over when it comes to the utterly realistic manner in which the film is shot. This helps a lot in creating an intense atmosphere that helps the audience get involved in the proceedings. But of course, it is the watertight script, for most of the duration, which also largely helps its cause. The intelligent manner in which flashback is used deserves special mention. 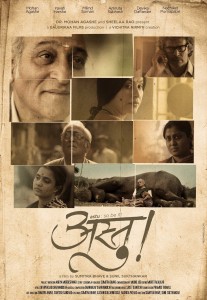 But the bigger achievement is the message given with regards to the attitude of people from starkly opposite strata of society towards people with a condition like Alzheimer’s. One of the rich layers is also the equation of relationships. The film also manages to say a lot more through some sub-plots, moving images, conversations and conflict between characters. It will account to spoilers if they are listed here.

The only problem with Astu is its duration. The film should have ended much before and shouldn’t have been dragged during the ending moments. Thankfully though, the overwhelming climax won’t let these points bother you much.

There is no scope for songs as such. But a couple of tracks used in the background gel very well with the situations, especially the one in a South Indian language. Milind Jog’s camerawork creatively captures even the simplest of scenes. The idea of using a hand-held camera on a number of occasions adds to the intensity. The editing is fine but there could have been more use of scissors.

It is Mohan Agashe’s act that helps the film to rise at such a level. The veteran actor is simply outstanding in a role that can be hugely challenging for any actor. You just can’t help but applaud when he shows signs of Alzheimer’s and speaks with his expressions. But despite such a towering performance by the main lead, Iravati Harshe manages to super impress with a dedicated act.

Milind Soman plays his part well. There is some issue with his Marathi pronunciation though. Nachiket Purnapatre too is wonderful in a difficult role. Despite arriving in the latter part, Amruta Subhash leaves behind a tremendous impact through her brilliant portrayal of a tribal woman. Ila Bhate and Devika Daftardar too shine in extended cameos.

Astu –So Be It is a must watch for the lovers of sensible cinema. It is sad that such a film is unable to get a proper release. Needless to say, it needs some tremendous word-of-mouth from all those who have been fortunate enough to have seen it.