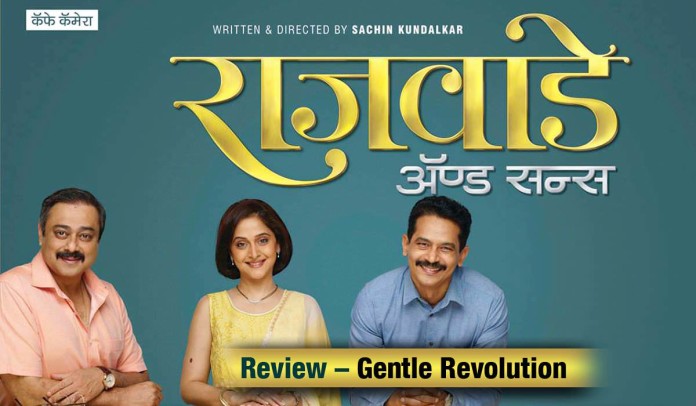 It is vital for every society to adapt change in the changing times by putting aside regressive or orthodox beliefs that limit individual progress. But, as per an old saying, charity begins at home or family. And when it comes to family, the issue of generation gap plays a major hurdle to change.

Filmmaker Sachin Kundalkar has presented such a changing process of a family with regards to generation gap in Rajwade and Sons in a thoroughly heartwarming manner. It is an intelligently crafted saga that is an achievement for modern day Marathi cinema.

Rajwade and Sons is based in Pune and it focuses on a big and rich joint family of Rajwades, who are into jewelry business since generations. The senior-most member, Rameshrao (Satish Alekar) has the final word with respect to the personal and professional lives of his sons (Sachin Khedekar and Atul Kulkarni), their wives and children. Nobody dares even think of going against his decision.

The family shifts from its traditional wada to a modernly furnished luxurious apartment. Despite the major change in their residence, Rameshrao’s orthodox values continue to rule. Belonging to the generation of today’s era, his grandchildren wish to live their lives as per their own wishes. The story also focuses on Rameshrao’s youngest son, Vikram, who had run away years ago and has never returned.

Going by the synopsis, the film appears like an age-old joint family saga, seen mostly in daily soaps. However, that isn’t the case whatsoever. Despite having a joint family tale of orthodox versus modern, Rajwade and Sons is in every aspect a new-age saga, be it storytelling, presentation, dialogues, symbolism or behavior of characters.

Such similar goodness was also seen in Kundalkar’s last work, Happy Journey. And like that film, this one too presents a series of deep questions and thoughts that are not spoken. But what makes the film work the most is the mature manner of handling the issue of generation gap and, later on, its solution. Anyone belonging to this part of the world would be able to see him or her numerous times in some character or the other. 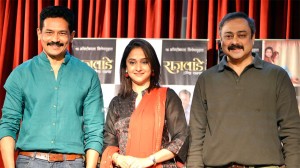 The film lacks any major drawback. The reaction of the family members towards a pleasantly shocking situation and the lack of footage given to Rameshrao at the end, are few minor issues.

The music (Debarpito, Adrian D’Souza and Tejas Modak) suits the genre with songs ‘Tagmag’ and ‘Mokale’ being impressive. Although DoP Arjun Sorte doesn’t get much scope to showcase his skills, he has captured the film well. The background score, as per the un-melodramatic content, is minimal and it works that way.

As writer and director, Kundalkar has also succeeded in giving proper importance to everyone from such an ensemble cast, which is a very challenging task, and made them deliver fine performances. Sachin Khedekar and Atul Kulkarni live up to their images of quality performers. It is a pleasure to see both sharing frame for the first time. Satish Alekar remarkably lives the character of an orthodox and rigid senior citizen.

Amitriyan Patil is a surprise package though. He gets to play an excellently sketched character and does complete justice to it. In the role of Rameshrao’s grandchildren, Siddharth Menon, Alok Rajwade, Mrinmayee Godbole and Krutika Deo are perfect. Godbole, especially, makes good use of the opportunity. Mrinal Kulkarni, Jyoti Subhash, Rahul Mehendale also succeed and so does the child actor Suhani Dhadphale.

Rajwade and Sons is a triumphant family saga of the changing times. Due to the family appeal and the content, the film will be a winner at the box office.