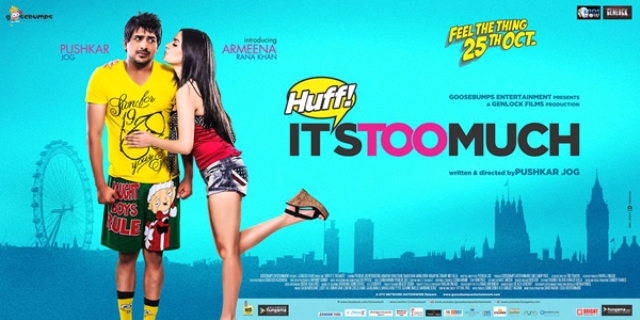 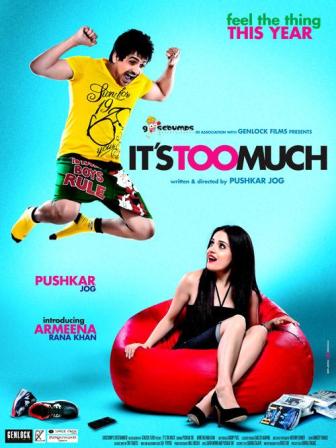 What would you call a film which draws so many inspirations from other Hollywood and Bollywood Rom-Coms and still looks as a confused and paranoid film just like the female lead character from this film? Here comes a Yet-Another frustrated crappy version of many Hollywood-Bollywood films in the form of Huff It’s Too Much.

First of all, The film tells a story about a couple in their 25 years of age living in London. Please take a look at the lead actor Pushkar Jog. Do you really think he looks like a 25 years old? Especially with his eye-wrinkles and double chinned face which cannot be avoided in the film’s poster itself? Some news papers and tabloid claimed “Famous Marathi actor Pushkar Jog debuts through this Film” in their respective headers  (PR generated stories, Of course). Famous Marathi actor? Really? If Pushkar Jog is considered as a Famous Actor, What would you call stars like Bharat Jaadhav, Subodh Bhave, Ankush Chowdhary etc?

As far as Debut is concerned, Pushkar Jog has already debuted in a very less remembered multi-cast “Flop” film called “E.M.I Liya Hai Toh Chukana Padega” (2008). Back home in Marathi Cinema, He has done some B Grade films which sank without a trace. He produces his own films and his debut Marathi (Self-Produced) film ‘Zabardast’ was directed by ace director Mahesh Kothare. Some insiders also claimed about the actor having a well-dressed staff accompanying him and wearing “Pushkar Jog Staff” name batch. Marathi cinema’s Kamaal R Khan? Oops! No offense to anyone. Sorry please.

Huff It’s Too Much is a romantic-comedy revolving around a creative director, his quirky best friend and a woman that he is confused about. The film is an all and out youth centric romantic-comedy set in London dealing with the tryst and tribulation of young ‘Desis’ staying abroad.

Another plot about Indians who live abroad and confused about their lifestyles and livings. Such plot, If treated in a right format can do really wonders. But it looks as if the people behind the scenes were only interested in shooting the film rather concentrating on the storyline.

The first half of the the film is just tolerable. But it’s the second half which tortures you to the core.

As i speak about the performances, Pushkar Jog really doesn’t know to act in a “Hindi” film, Despite starting his career as a Child Actor. Acting in a Marathi Film is different. The Body language, The Accent, The Style etc. But performing in a Hindi Film is another ball game. The Sarcasm comedy slang that he used in this one looks like a (Late) Laxmikant Berde Marathi style. Armeena Khan, Yet-Another Pakistani Actress/Model debuts through this film. She is strictly okay. Yes, Like every other Pakistani actress, She too has an Expression less face which somehow worked for this film. Why? Because the camera was mostly capturing the one and only Pushkar Jog. Rest of the actors were nothing to talk about.

Why Pushkar Jog directed this film? Why this film was made in Hindi? Why does Pushkar Jog’s smile reminds you of iconic Marathi director Mahesh Kothare? These are some of my questions which still remained unanswered.