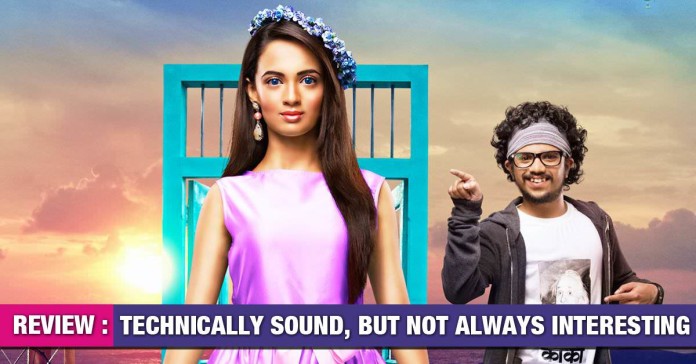 Sujay Dahake’s debut film had won the hearts of the masses and critics alike. Ajoba, his second venture, despite being path breaking in its subject, was a bit of a mixed bag for me. Phuntroo, too, ends up being like Ajoba- a film that can be appreciated for doing something new in Marathi cinema, but little else. 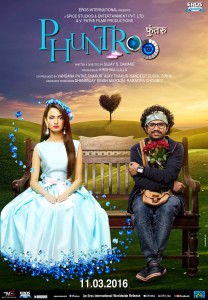 In Phuntroo, we have a college geek named Vira (Madan Deodhar) who is irresistibly drawn towards Anaya – a slim beauty. Apart from being the general secretary of the student union of the college, Anaya is also in a relationship with the college senior Nano who has been consistently winning the annual gadget competition of the engineering college. Nano’s project for next year requires a room with computers of higher specifications and he manages to get the laboratory of the now deceased founder of the college with the help of his girl and Vira – who has agreed to help Nano with his project. While working on the project Vira tells Anaya of his feeling which she doesn’t give much heed. While struggling with the rejection, Vira accidently stumbles upon an unfinished project of the founder in his room. The founder Mr. Rao was working on a creating a holographic projection of an artificial person programmed by him. Vira picks up from where Rao had left it unfinished and vents his frustration into creating a holographic projection of a programmed artificial person which is like a virtual reproduction of Anaya. The more he works on the programmed person created through artificial intelligence more it starts becoming like the real Anaya.

The biggest issue I had with the film is that nothing really takes any solid shape or form here. It is ironic that this has to happen to a film that deals with holograms. Vira, a college undergraduate, comes up with a hologram of Anaya without much of a struggle. Yes, he borrows a lot from Mr. Rao’s work but you are left unconvinced about the capacities of Vira coming up with something this significant and accurate. A large part about the charm of science fiction is a plausible explanation about the science in the film, but the film is short on that aspect too. As a result, you aren’t as wowed by the sci-fi elements as much as you should be.

Shala was very sharp in the manner it established the world of the gang of friends in school and also the infatuation the lead character Joshi has for Shirodkar. But this isn’t replicated in Phuntroo. The scenes exploring the chemistry between the gang of college friends lacks the vibrancy and sharpness necessary. The crush Vira has for Anaya is brought forward through two songs, but they do not make much of an impact either. So, neither the romance nor the sci-fi holds much of your attention. You don’t connect with the film and care little for the characters.

However, Phuntroo is that rare Marathi film that is well crafted on the technical side. Where most Marathi films resemble either plays or tv soap operas in story as well as their direction, Phuntroo is a breath of fresh air. The look of the film brought to fore by the dop gives it a mystical feel. The visual effects used for creating the holographic projection are spectacular. VFX even in big budgeted Hindi films are at times laughably bad but here nowhere does it comes across as amateurish and the vfx team have done a commendable job.

The dialogues deserve a special mention, as they are full of sharp wit and smart references to scientists and other thinkers like Sigmund Freud. The conversation between Phuntroo (the holographic projection of Anaya) and Vira are the high points of the film.

Another plus of the film is the acting; Ketaki Mategoankar has come of age with her acting here with her portrayal of Phuntroo. In the beginning, Phuntroo, though it looks exactly as Anaya, doesn’t have much life in it and is a very robotic creature. As Vira goes on working on it, Phuntroo becomes more and more like Anaya; this subtle progression of the artificially created person into something more lifelike is brilliantly brought about by Ketaki in her performance and the dialogues as well. Madan Deodhar, who is a sort after actor in the marathi film industry with his superlative performance in Vihir, lives up to his reputation and does justice to the role of an egotist science geek who has hopelessly fallen in love with a girl.

Even the solid performances, sharp dialogues and the technical expertise aren’t enough to save the film from becoming something that doesn’t draw you enough into its world to make it enjoyable. It can only be lauded for being that rare well mounted film in Marathi cinema that broaches spaces hitherto unexplored.